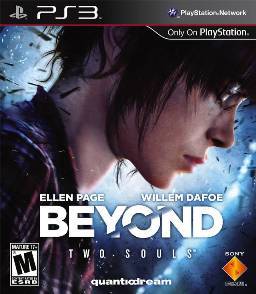 Story:  Since the story is 99% the only reason you would play Beyond Two Souls I will not go into too much detail. However you play as Jodie (Ellen Page) a girl who has lived with a teathered spirit and can interact with the enviroment or other people.  The story follows Jodie from Birth to Adulthood, (not really in that order) showing how she survives, copes with her spirit Aiden, all while attempting to discover herself, her past and her future.  From secret government bunkers, to begging for money on the streets you deffinetly get around to some interesting areas, but the pacing feels forced, and the way Quantic Dream chopped up the story (think like the movie Momento) just feels confusing and like a way to cover up plot holes.  Also my interaction on how the story plays out feels very limited (if it even exists), sure there are choices throuhout the game but nothing seemed to really have an impact on what happens next, I know I know “interactive movie” but I wanted to at least have something be in my control.

Gameplay:  Now obviously like I said before I was expecting an interactive Movie. But the gameplay felt entirely way too restrictive.  At times you will need to play as Aiden (the teathered spirit) to open doors, kill someone, possess someone or just be out right annoying.  Any time you are Aiden the game will show you all the items or people you can interact with with a blue or red glow.  The only problem is these interactions are not up to you.  Why can I possess this guard but not the other? How come I blast open this door but not the one that says exit?  Oh I am a Spirit that can pass through walls right?  Why the hell cant I pass through this wall?  This experience just left me with a very sour taste in my mouth, yes I understand “interactive movie” but I would have much rather had these parts be automated than fly around like some drunk ghost running into walls.

Sound:  Academy Award nominees Ellen Page and Willem Dafoe give a stellar performance and as a scifi movie Beyond Two Souls is fantastic. The musical Score is actually very good as well, but most of the game is full of scilence to build the moment.

Graphics:  Quantic Dream has nailed facial graphics, I’ll give them that.  Multiple times I had to remind my self that it wasn’t actually Ellen or Willem on the screen, especially in closeups.  It was also amazing to see the aging process of all the characters as the story progressed, very awesome.  Unfortunately these amazing realistic faces looked out of place in a less detailed world.  Now dont get me wrong the game is beautiful, but to put it bluntly it felt like a “butterface” effect.  For example Jodie’s face looked humanly realistic and awesome, Jodie’s hair looked like Jaggy dog crap.  Also Character movements felt awkward and clunky.. “Oh God Jodie HURRY WE ARE ALL GOING TO DIE!!!” “Okay, Ill just saunter over there slowly” .

I’m going to skip a gripes section this time as I feel I have picked on the game enough, and if I were to say much more I feel I would give away too much of the story. On that note, if you are able to find the game for cheap or borrow it, the story is touching and if you can piece it all together is actually fairly good.  The world of Beyond Two Souls is very rich and I feel there is a whole lot more we can see, however,  there are still tons of open questions in the game and the story and the more I think about it the more I think of plot holes or odd quirks. Despite the fact that I really REALLY wanted to love this game I am just left with a feeling that Beyond Two Souls bit off more than it could chew.