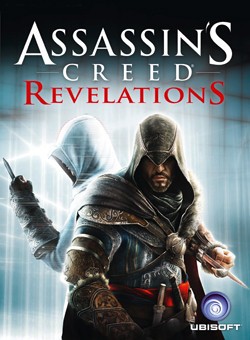 The Assassin’s Creed franchise has been one of my favorite games since its initial release back in 2007.  However, at this point in time I have grossly lost interest in Ezio, hence why I waited so long to play the game of a series I enjoy.   Aside from that, I also felt that AC:R was just a large expansion to the Brotherhood/AC2 title, and in that, I was mostly correct.

Much like Halo:ODST or all of season 9 in Bleach.  Assassin’s Creed: Revelations feels like a like a large DLC/wast of time with small bits of information to just barely make it worth it.  For starters there is only one small city you really get to explore, Constantinople, now I say small because compared to other versions of the game this one is tiny, Shoot even the First Assassin’s Creed had multiple Cities for you to explore.  After the first hour or so you have just about explored everywhere you can go.  Also, Revelations only took me just over 13 hours and that’s with opening all of the shops and completing all side missions.  That alone shows that this game was obviously not meant to be a stand alone title but was probably found to be too big for a late DLC for Brotherhood.   Ok now that I have griped about the main problem I will go on to say that my time in AC:R was enjoyable and it was a very nice wrap-up for the whole Ezio/Altaïr saga.

Gameplay:  If you have played any of the previous versions of the Assassin’s Creed franchise you will be completely at home.  Ezio/Desmond handles very well and usually does a good job navigating the insane cities.  The new additions to the gameplay this round are the Hookblade and Bomb creation.  The Hookblade allows you to Grab just out of reach ledges, use zip-lines around the city and grab enemies in combat.  The addition of the Hookblade was very welcome as it made climbing buildings way easier and faster. The bombs, on the other hand,  were mostly pointless to me.  Now don’t get me wrong they were made very well and the ability to change the type of bombs you could carry was a neat idea, I just found myself never really using them as I was already well stuck in my ways from past games.  They also have the most pointless side quests I have ever seen in a AC game, more pointless than the bird missions in AC2.  Long story short if you enjoy the AC Series and have waited this long to play the game like me you will still enjoy it.

Story:  Desmond is now stuck in the Animus in a coma like state.  Why is he stuck in the Animus you say? Well because his ancestors still have something to show him and wont let him “wake up”…cuz that makes sense…   While stuck in the Animus there is little for you to do other than reflect on Desmond’s back story via odd “Portal” FPS style platforming levels.  It was nice to hear about Desmond life before he got caught up with Abstergo but they seemed rather forced and lack luster.  Anyway when you are not “reflecting” on your past the only other option is for you to jump back into Ezio’s life and see what he has left to show you.  Ezio now an “old man” is on the trail of Altaïr to find out more information about the Assassins past.  Upon arriving at Masyaf Ezio is shocked to find it crawling with Templars who are there to find the secrets of the Apple as well, Ezio then finds that there is a secret locked door and the keys are hidden within Constantinople.  Here is where 99% of the game is played as you search for clues and the keys.

Graphics:  Still looking nice as ever, the graphical differences between Brotherhood and Revelations are minimal.  However, this was by far the buggiest AC game I have played yet, and doesn’t bode well for all the reports of AC3 being super buggy as well.  If anything this is showing how Ubisoft is becoming lazy in its development as they know people will buy a AC game no matter what. Although I will say the load times were a lot less, shorter and did run over into cut scenes as much.  I will point out that I wish the Constantinople culture was represented a little better instead of just new skins but I’m not going to cry about it.

Sound:  Sound is always spot on in the AC universe and this one does not disappoint.  The voice acting is great and the music always fits the mood well.  However I wish they would have caught the culture a little better again, it still sounded a bit too Italian to me but Ezio is Italian so I cant REALLY complain, I just feel like it was a missed opportunity.

All in all since I already gripped on how I feel like this is just a full DLC there isn’t much more I can say, and by games end the story line does do a nice job tying everything together.  At this time its well worth the $15 to play this game especially, if you like the story of Desmond and Ezio.  I will also say Revelations is my least favorite game from the Assassin’s Creed franchise but I wont say its the worst game ever… Either way it is nice to know I BEAT IT FIRST.