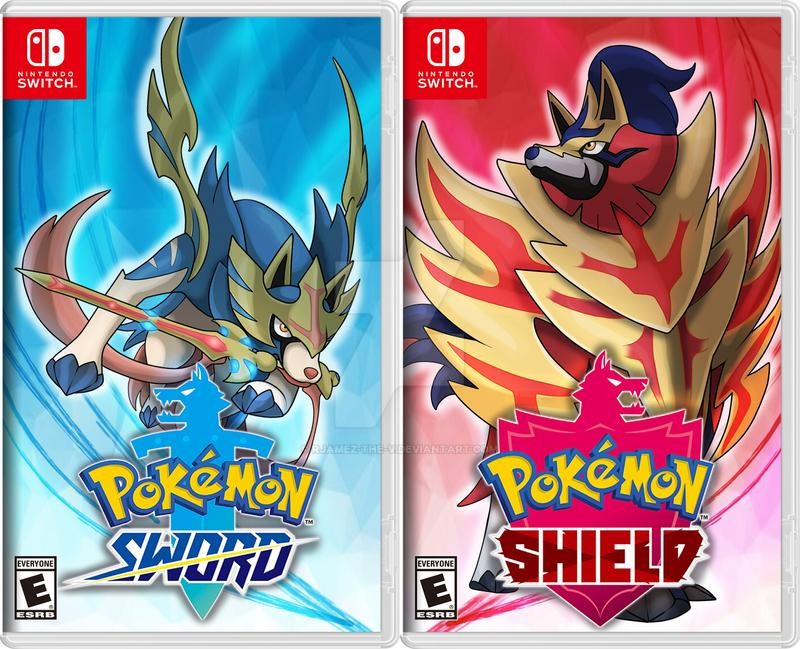 $119.99
The latest installment of the Pokémon series, set in the new Galar region!

With all the hype and criticism floating around about Pokémon Sword/Shield before its release, I decided after skimming a single Reddit post, rather, essay, about a game that was not yet available to the general public, that it was best if I based my opinion of the game solely on my personal experience while playing and interacting with friends and fellow players. Imagine that. It comes down to to this: Sir Fetch’d or cotton candy Ponyta? Are you a dandy or a loli? This is the only thing on which you should base your choice. I’m kidding, of course. There are many reasons to choose both, but my best suggestion is, ask your friends! What did they get? Did all of them get Shield like my dingus friends for some reason? Get Sword! Have no friends? Get both, buy a Lite, and trade with yourself! After playing through Sword, though, part of me wants to get Shield just so I can make a birb team (my Sword team is all doggos). Anyway, don’t get hung-up on this decision. Both are amazing. Aside from which Pokémon are more readily available to capture or are unique to each edition, they also have different gyms and gym leaders. Shield has exclusive gyms with ghost, poison, and ice types, and Sword has fighting, fairy, and rock type gyms. This alone has me interested in playing Shield simply for the alternative experience potential, but the cost is a bit prohibitive ($120 for both). I understand this game is for children, however, the gym battles are not even close to being difficult enough! The only one I struggled even an iota with was the final champion battle and, even then, my struggle was that I wasn’t paying attention to type advantages. Once I did, it was as easy as the other battles. I am not sure but perhaps I leveled too hard before starting the gym challenge. Regardless, the gym leaders should at least scale somewhat to your team’s level. It was too easy to defeat all of them, even with my limited recollection of type advantages, and I did not take a significant amount of time leveling my party on the routes between towns.

However, I do think that the experience of a gym battle is the best that Game Freak has ever developed. When the gym leader brings out their final Pokémon, the crowd gets more hyped up and starts to cheer/sing, which brings an extra level of excitement to gym battles that definitely was not there in previous iterations. Don’t spatial logic get in the way of enjoying a giant 30,000-person arena cheering you on in each little hamlet you come across in the game. New to Pokémon Sword/Shield, the Wild Area provides players an opportunity to view other players standing still in the same area they are moving around in. Maybe it’s just me, but it does not seem particularly special or beneficial to go online when in the Wild Area, aside from pretending to interact with other players and giving you a snack and, of course, raid battles. The main purpose of the Wild Area is to catch wild Pokémon. Certain Pokémon only appear during particular weather patterns, and some of these weather patterns do not begin to appear for players in the Wild Area until they are post-game.

Raid battles, very similar to the ones in Pokémon GO, I might add, are the other activity exclusive to the Wild Area and require you to be connected to the internet to raid with your friends and other players. They increase in difficulty as you progress through them, and type advantage is, as always, the key to success in these engagements. After you beat the game, all one- and two-star disappear from the Wild Area, so be sure you have completed them all before entering the final battle with the champion (unlike me, who completely forgot and now only has three- and four-star raids in the Wild Area).

Are they running out of ideas? They have been for years. This time we get a Pokémon that is steel-type and turns into a giant skyscraper when it Gigantamaxes. Yes, a skyscraper. That’s Duraludon: Also, is the fan-favorite (for all the wrong reasons), Wooloo: Alcremie, the whipped cream Pokémon that comes in a variety of flavors (seriously): And turns into this when it gigantamaxes: However, we got some new, incredibly adorable Pokémon such as Yamper, the Corgi Pokémon: Sir Fetch’d with his lemongrass sword: And one of my personal favorite Galarian adaptations, Galarian Weezing with his smokestack/bong top hat and noxious gas mustache and beard: Did I notice that a bunch of the original Pokémon are missing? You know it. It is not easy to get them, either, if you’re obsessed with completing your Pokedex. However, as someone who missed Generations 3 through now, I’m not missing as many as the die-hard Pokémon fans surely are. The main reason why this was done, supposedly, was because the animation for these “missing” Pokémon was not completed, or something like that. I don’t know if I necessarily buy into it but who cares, there are still Pokémon missing from the base game (although some amazing nerds have already hacked the game and added them back in).

I wholeheartedly enjoyed this latest installment in the Pokémon franchise. What it lacked in difficulty at times it made up for in a variety of activities, such as raid battles and the Wild Area, as well as a good story.