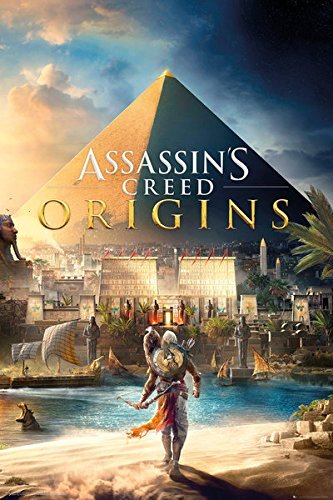 $50
As the title implies this is the Origin story of for the Assassins group for the series namesake. Unlike other origin stories, Assassins Creed Origins thankfully does not feature moody teen versions of your favorite characters and heroes.

Time to put on your best hidden blade and white cowl as its Assassinating time again.  This time, as the name dictates, we start at the beginning and witness the Origin of the Assassins.  With a whole new set of protagonists and the largest world map ever in a an Assassin’s game there is plenty to see, do, and murder in Assassin’s Creed: Origins.

Assassin’s Creed when it was originally first released on PlayStation 3 was groundbreaking.  An actual proper open world stealth assassin game we haven’t seen the likes of before, especially with a brand new climbing mechanic which added another dimension to your strategies.  On top of a fantastic game Ubisoft also built an interesting world and story combining both ancient history and scifi.  This lasted for quite a few years until, as I like to call it, the Dark Ages.  After killing off the main hero Desmond, Ubisoft proceeded to release yearly shovelware versions of the game and storyline/over all quality took a dive.  Sure there were a few good games, but for every Black Flag there was a Unity and my desire to keep playing the same game over and over again was waning.  I am sad to admit that because of this reason a large portion of the Assassin’s Creed library has remained unplayed by me and also explains why I was hesitant to pick up Origins at release.   I obviously am not the only one who felt this way because only a few months after release Ubisoft announced a fairly decent sale and I was more willing to take the “risk”.

Gameplay:
First let me just state that this is by far the best ‘Assassins’ experience I have had since Assassin’s Creed was first announced,  I finally felt like a real person trying to make a change in a hostile world and that I wasn’t just an unstoppable automatic murder machine.  Sorry guys, there are no kill streaks, auto counters or easy kills in this game.  Even with end game weapons and skills a large group of enemies can still take you down if you are not careful or act too hastily.

On that note, lets talk a second about the fighting:

Climbing has also been improved or nerfed depending on how you look at it.  Instead of buildings being a puzzle to figure out how to climb or trying to find your next handhold, you can now just climb anything, straight up, almost like a Egyptian Spiderman.  I personally loved this change as it made getting around the LARGE open world a lot easier and it was nice to know that no matter where you started on a building you knew you were going be able to climb it, no more awkward hops at a wall.  This change also reduced the amount of improper jumps and other pitfalls resulting in you falling to your death.

A big boost to AC:O is the fact that all the side quests are not just the same fetch/kill quests over and over again, and while there are collectables they are at least placed in areas that you are looking anyway and not a huge pain in the ass to attempt and collect (No more Feathers huzzah).  Speaking of side quests Ubisoft took a note from The Witcher 3 and made side quests matter again, with some side quests even having more of a narrative than the actual story line.  Ubisoft has made it clear that they care again about the Assassin’s Creed series and are giving Origins a ton of TLC, and have continued to support the title with more than just the typical planned paid DLC.  With a few extra end game quests added on,  Crazy out of story OP Boss battles with the Gods of Egypt them selves, and a soon to be released “walking tour” of Egypt to literally just explore without worry of combat.  These small but fun add-ons ensure Origins is easily a game you can continue to play well after you have beaten it.

As one of the largest open world games currently available it is very impressive to see how much beauty they are able to cram into the game.  However much like titles in the past, look too closely you can start to see the seams.  NPCs are ugly and repeat way to often and a lot of textures get pretty muddy when you get too close, common issues but not game breaking.  I also noticed quite a few drops in frame rates especially when opening up to larger areas or some cut scenes which seemed odd.  That isn’t to say the game isn’t beautiful, Ubisoft knocked it out of the park in a lot of ways but the star beauty is in their water, my God it is jaw droppingly beautiful sailing around the Nile dodging Hippos.   And while main characters like Bayek and Aya look amazingly detailed, my favorite graphical moment came from my first time flying around as Senu, Bayek’s eagle bro.  That flight mechanic pushed the game to new levels and made scouting and strategizing attacks fun again.  I found myself flying around as Senu a lot to just relax and take in the worlds beauty.

Assassin’s Creed Origins is easily the best ‘Creed’ game to come out in years and reminds me why I liked the series.  The visuals are jaw dropping, combat is fun and the quests are more than just the basic go here kill that…well it is that, but more.  With continued support from Ubisoft even outside normal DLCs there is plenty to keep you busy for a long time.

I BEAT IT FIRST
Jason Polenick