During the PC Gaming Show at E3 this year we saw Alienware show off a backpack PC powerful enough to power a VR headset (read Oculus Rift or HTC Vive) thanks to the latest graphics cards from AMD without tethering you to a stationary PC. Yes, HP and MSI both have backpack VR concepts, but Alienware made a slim, lightweight option with hot swapable batteries.

No price or release date have been announced yet, but the AMD cards are relatively inexpensive compared to NVIDIA, with the 480 starting at $199. This leads me to believe that if Alienware were to bring this amazing concept to market, that they could price it under $1,000. The system itself has 2 USB 3.0 ports, 1 HDMI, and 1 headset jack, allowing you to not only connect it up to a VR headset, but really any monitor and a mouse and keyboard if you all you really want is a more portable laptop.

E3 was huge on VR this year, but everything was tied to a stationary location. There is no current wireless VR solution, which makes Alienware’s solution so much better. A computer you wear on your back with the power to run VR is a huge deal. You are now free to move around without worrying about tripping over a cord or reaching your cords range. There is still the problem of running into your coffee table or a wall, but now you can take your VR anywhere, and coupled with Nyko’s vibrating bracelets that make an invisible wall where you decide it make this a true go anywhere solution that looks good too. 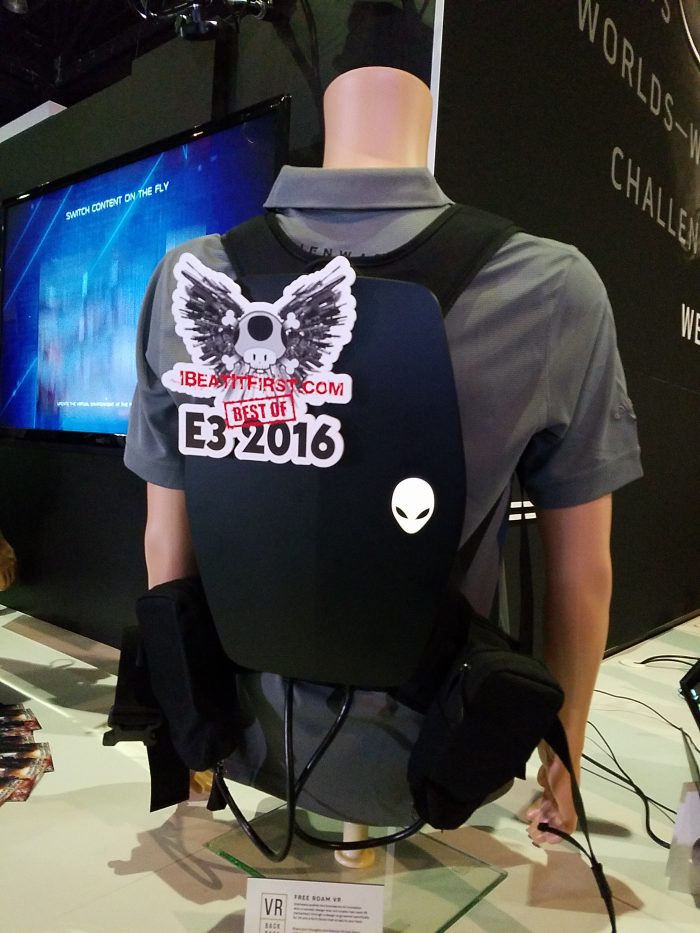 The biggest question that comes to mind with something like this is battery life, and that’s where the hot swapable batteries are huge. Located in two pouches, one on each side, are the batteries to run this beast of a machine. What this allows you to do is swap one battery out for a fully charged one while the other battery pack is powering the machine. You don’t have to power down the PC and wait for it to charge, interrupting your gaming experience.