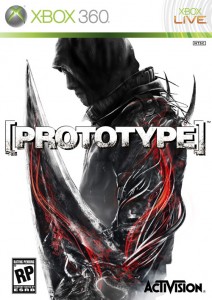 Time : 5 wasted hours of my life

Prototype huh?  Where do I start on this piece of garbage?  Well I’m not going to lie I was kind of super excited to try this spawn from hell when I picked it up at game stop for $17.00.   I mean look at the cover, it’s the Spawn version of Assassin’s Creed’s Altaïr.  He’s rocking the hoodie, looks mysterious and has a giant mutating knife dildo arm thing.  I mean how can that not look bad ass, right? LOL So I gave Prototype a shot, really a 5 hour, 2 day experience before I sent this piece of shit back to the Game Stop toilet bin, I mean bargain bin!

Where the hell can I start? Oh yeah so after about five hours I came to conclusion that the story is extremely boring and nothing really original. Your are “Blah Blah Blah” (and yes I can’t remember the character’s name it was that bad) a government test gone wrong/ right, running amuck in a city somewhat resembling New York City, in search of his girlfriend.  While this is going on this non-original zombie/rage virus is taking over the city, and it has completely gotten outta control.  There is also this government agency I think, or maybe military going around killing everyone. Yep that is all I got out of it and all I cared to know!

Besides the story the other two things that drove me nuts were the graphics and the game play.  They were both the final nails in the coffin for me.  Ok, I know the game came out in 2009 but they graphics were fucking ass garbage.  There was nothing pretty to look at in the game unlike Dante’s Inferno. 🙂  Everything looked the same and the detail in the characters was fucking horrible looking.  If my eyes could catch Gonorrhea from looking at this S.T.D, then I for sure contracted it.  The other super annoying factor was the control of the game. Yeah it was cool to run all over buildings and have no real sense of gravity, but it got old real quick. When I first started playing, it really felt like I had put in a cheat code to defy gravity.  I seriously could have just closed my eyes; press the run button and push forward on the joystick opened them back up in 20 seconds and have no fucking idea where I am at.  It was really just too much.

Ok just one more little rant, Prototype came out in 2009, Assassin’s Creed came out in 2007, why couldn’t Activition come up with their own style of game rather than copy Assassin’s Creed to the fucking bone with their side missions. Do you think people like running around through rings or collecting orbs to gain experience? FUCK no that shit is the most boring and annoying shit on the planet.  If Assassin’s Creed wasn’t such a bad ass game as in story graphics and controls I would be ranting on that shit too. Like Jason said a couple days ago kind of in these words, “Superman 64 had to travel through rings, look where that got it”.

In the end DON’T buy this game, and if you know a friend DON’T let them buy this game.  If you do know someone that has bought this game DON’T be their friend anymore.  That includes me I am crawling in my hermit hole and never coming back out except to buy a sandwich at lunch time!

8 thoughts on “Prototype! I mean Protoshit!”