We’re live at the PC Gamer Press Conference at E3.  We’re hoping to see some great things from AMD and the like.

John came out to talk about the transition from Killing Floor 1 to Killing Floor 2.  First step in production was to not screw it up.  The gameplay is still messy, gross, and gory… just how we like it.  The new engine they’re using allows them to basically fill the body with as much fluid as they can and send intestines flying everywhere.  For those on the early access, you can feel assured that your progression will not reset at the end of early access.

Next up, John premiered a new Vietnam fighting game called Rising Storm 2.  It’s still a little rough around the edges, since it’s just started production, but it looks promising. 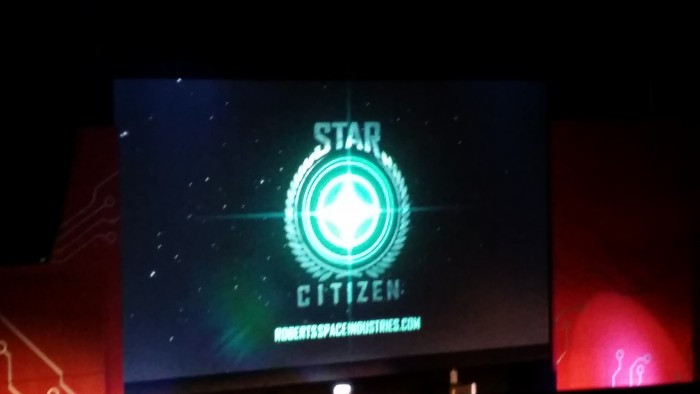 This was unfortunately a recorded video, because they’re still in London doing mocap, but a lot of the screens that they showed look great (especially the spaceship models).

Richard is the person that meets with devs to discuss new innovations coming up, as well as talking about the great things that make AMD what it is with consumers.  He dropped the names of the 2 new AMD cards dropped today but didn’t go into any details.

AMD is looking forward to DX12 because it allows for full use of all of the cores on a GPU at a time.  The software will help them mediate coordinating the cores to work together.

The game takes place 2 years after the last game, with augmented people being viewed as a danger to society and are moved in to ghettos.  The game has a focus on making sure that there is enough clutter and layers on the screen to make it seem believable.  The adjustments to the depth of field and lighting definitely make the environments seem real.  One of the devs prefers to go through the level in complete stealth and then backtrack and kill EVERYONE.  Sounds like a good way to go about it.  The varying styles of play helps them make sure that the levels are maximized for all aspects of play.

They ran a video to commemorate the 15 years of Total War.  There was no in engine footage but we can expect one in July.  We were, however, told we’re allowed to call it Total WarHammer… So we’re gonna go with that.  Not much else was given since it’s still in pre-Alpha, but they are still very excited to work with Games Workshop.

That’s right, you read that correct, Microsoft has made an appearance to hopefully show that they haven’t lost their way with PC gaming.  Windows 10 and DX12 will help devs make the transition from console to PC, and vice versa, and will also hopefully help with cross platform compatibility (the holy grail of online gaming).  Killer Instinct will be coming and have this great feature. 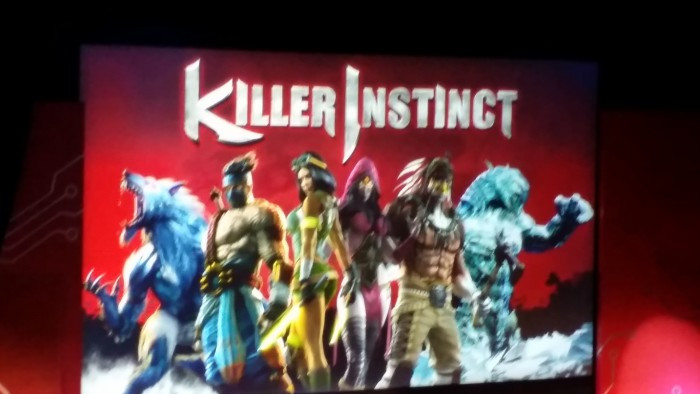 Now Fable Legends and Gigantic devs have shown up, primarily to talk about cross platform some more.  Since Fable Legends will be a free-to-play game, there are some trepidations to the game.  They say the reason they went with the model was to make sure that it got into everyone’s hands and that they’re dedicated to supporting years of add-on content for the players.  Gigantic is meant to be a combination of a shooter and a MOBA, an odd combination.  Not all characters will rely on aiming but they think they’ve reached a good balance between the skill of the player and the stats of the characters.  Closed Beta begins August with an Open Beta hopefully later this year.

And now Rod Ferguson from The Coalition has shown up.  Gears of War Ultimate Edition is coming to PC!  That’s right, he just came out and said it.  The PC version will even support 4K gaming.  They’ve brought back Team Death Match and King of the Hill for the Ultimate Edition as well.

It’s not driving, it’s trucking… Kill me now!  made using Google Maps, and that’s about the extent that I can write about this BORING game. 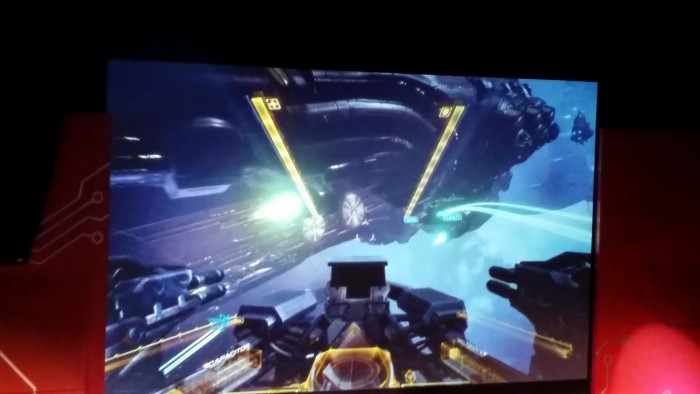 Now we’re talking about VR space combat, basically a nerds dream come true.  It looks really good and like it’s quite a bit more intense when you add the immersion of the Oculus Rift.  The cockpit is very open, with a lot of windows, allowing you to look around to get a lot of situational awareness.  They originally started the game for VR so there was no transition problems, they had to learn a lot of the thing that work in VR on the fly though.  Eve Online and Eve Valkyrie are 2 separate games.  We’ll have to try to get a demo if this ASAP.

We heard a little bit from Dean during the Microsoft Presser yesterday.  Dean has had a lot of experience with Early Access gaming and is happy about the changes that have been made, especially by Valve.  ION is the same game that we saw, and they didn’t give us anything more than we already saw.  The view is supposed to be a more Diablo style view, rather than first person, but will be fully 3D.  They don’t have a timeframe for starting their early access unfortunately.  Case in point as to why it’s taking a while, there was a bug recently that when you clicked on a character all of their organs would fall out.  ALL OF THEIR ORGANS!

The game was made as an homage to Quake and Doom, and definitely has the feel.  The blood and guts are all persistent so they are litteraly painting the room red with blood.  When your gun runs out of ammo you throw it.  “You jump in, shoot shit in the face, and paint thing red” actual quote.

Pillars of Eternity: The White March

This is an expansion to the game and definitely feels epic.  The level cap has increased, and new characters and weapons are available, but nothing more was shown in the video.  There is a lot of boring talk about kickstarter funding and getting additional money from other companies.  Thanks for the boring talk about funding Obsidian. 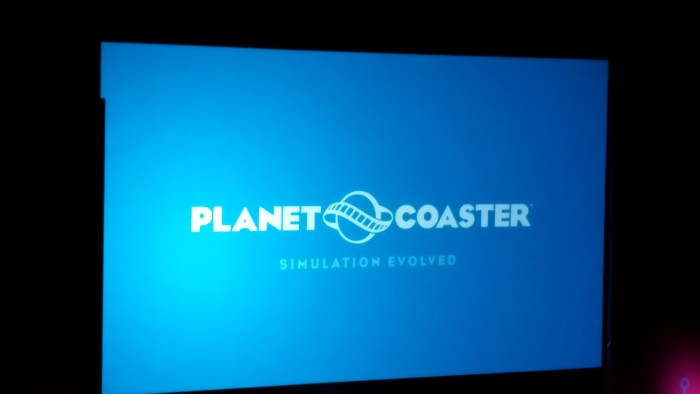 Arena Net is adding a Guild Hall to help make the gaming experience more social.  You will have to attack and conquer the ruins and will be able to expand and build upon it as the Guild grows.  You will also have your own Arena to fight PVP in, as well as host fights with other guilds.  the Guild Hall is an entire map that your Guild will own.  You will be able to create Guild Teams and go on missions.  You will get to build a Crafting Center, to build items, and a War Room to help coordinate attacks and defense.  Pre-ordering starts RIGHT NOW and you will get full access to all betas.

It’s hard to believe that Hitman is 15 years old now.  Technical issues caused a very intimate moment on stage.  The new sandbox style definitely still seems amazing.  The locations are 6 to 7 times bigger and will not create any check points throughout the game.  Their on track for their 12/8/15 release date.

There were a total of 9 new cards launched today.  The flagship is the R9 Fury-X and is designed for DX12.  The R9 Nano is only 6 inches long and is aslmost as powerful as the larger units due to smaller memory architecture.  They brought out a 16 terraflop gaming system, small enough to sit in your home theatre.  Inside the metal case, delivered at the beginning of the show, is a Dual Fiji GPU card (first of it’s kind).

They have a new expansion for Arma 3 that is brand new.  It’s Tanoa, a brand new terrain that looks very expansive.  It’s the first Pacific Island terrain that they’ve added to the game.  They really want someone to mod Dinosaurs to Tanoa so we need to make sure that someone gets on that right away because I want to see it too.

This is that blind girl rip off of Unfinished Swan we saw at the MS show.  That’s all we need to say.

This is Splash Damage’s first solely owned shooter.  The video feels an awful lot like Team Fortress with a lot more cursing… and orbital strikes.

This has quickly turned into the second running of the MS Presser from yesterday.  Tacoma is basically Myst in Zero Gravity, incase you weren’t aware.  The Space Station Tacoma is a small station with only a 6 person crew and you need to figure out what happened to them.

This is a new survival horror game from the creators of Amnesia.  The game takes place on a station under the sea and definitely takes advantage of the setting.  Soma will be available on PC and PS4 9-22-15.

There are currently over 3 million people enrolled in early access with Day-Z.  They’re going to be adding a few vehicles that you will be able to use.  You won’t be able to drive the vehicle right away, as you will need to devote time into repairing.  They will soon have single player, no internet, capabilities, as well as a self hosting server system for creating large lan parties offline.

This is a Space Sim exploration game that, like Day-Z, is a mod of another game.  The in game graphics look good and it should have some very realistic physics.  There should be a Beta coming this summer.

He got bored about 6 months in to retirement and knew that he wanted to come back into development.  He had a desire to get back into First Person, rather that 3rd like Gears, and that drove his choice of what game to develop.

We are now over 2 hours in!

This is an interesting looking bullet hell shooter.  They’re pulling influence from Dark Souls, so you know that this game is going to be HARD!  They have added the ability to jump roll over the bullets coming in, allowing for a richer dodging system.  They have created over 200 weapons, 1 that reminds me of a proton pack.

Blizzard is in the house!

Yay… another MOBA.  They’re here to talk about the first expansion to Heroes of the Storm: Eternal Conflict.  This expansion, coming on 6/30, will add Diablo to the game, and will even have the Treasure Goblin from Diablo 3.  Kind Larek will turn into a wraith when he dies, and he can effect the speed of other characters until he comes back to life.  Once his timer is gone he will return exactly where the wraith is.  The Diablo Monk will be coming in from Diablo as well.  He will be both an attacker and a healer/support character in the game.  They’re really trying hard to add as many Diablo Gods as they can.  Star Craft 2 Legacy of the Void will be out soon and will finally end the storylines of characters started 17 years ago.  In true Star Craft fashion, there was no gameplay shown and only a ton of FMV.  Early Access will come with the pre-purchase of Legacy.

We shall hopefully get the information that wasn’t allowed last night, due to time constraints by Sony.  There is still no release date for the game, they were going to try to do it at E3 but didn’t make it, but should have it soon.  They are announcing now that it will release on both PS4 and PC at the same time.  Given the grand scale of the game, and that they only have 10 developers working, they have tons of bots that visit planets to make sure that nothing is broken during development.