I was able to see Rurouni Kenhsin Part 2 at FilmBar in Phoenix, Arizona. Part 1 was a great adaptation, and Part 2 proved to be as well. Part 2 was far better, mainly do to packing more action that Part 1. Fans of the anime could see this coming as the action in the series picks up as it goes on.

Part 2 starts by introducing the main villain of the series, Kenshin’s successor, Shishio Makota. During the war that brought on the Meiji era, Shishio was a fellow killsword with almost as much skill as Kenshin. In contrast however, he didn’t seem to care about his comrades or have any bit of compassion, making him Kenshin’s counterpart. This made him perfect for secret missions, that after the victory, could sink the Meiji government if it got out. In other words, he did the dirty work for them that Kenshin might not accept. This also led to the betrayal of Shishio, having him assassinated and burned at the conclusion of the war. Oh, but that didn’t happen did it, but you probably knew that. Enter Shishio, now at the head of a criminal organization attempting to overthrow the government and exact his revenge. Now it is up to Kenshin to stop him, because no one else is skilled enough. 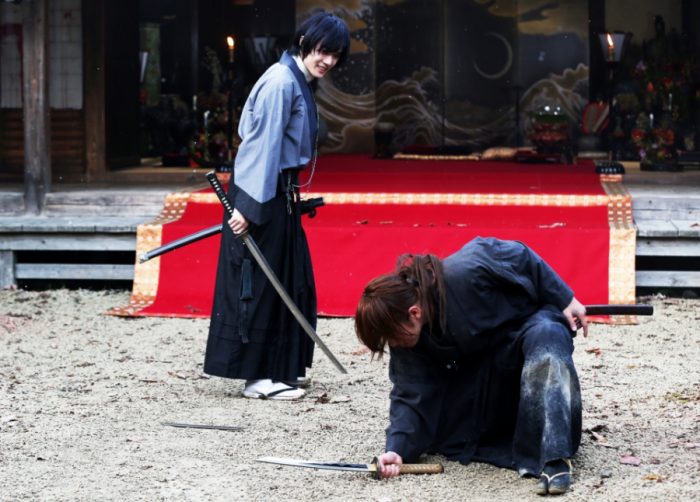 That’s the basis for the story of Part 2, which was simply fantastic. I left the theater after watching Part 1 finding it true to the source material, with great action, and well, it was entertaining. Part 2 on the other hand, was fantastic. Part 1 did a good job of setting up the story and relationships with the main characters, and Part 2 just upped the action while introducing new characters. Attack On Titan Part 2 Live Action this was not, it was an amazing film that I can’t stop thinking about. The biggest issue with it is that I have to wait until October 3rd to see the finale of the trilogy, Rurouni Kenshin Part 3: The Legend Ends. If you happen to Phoenix around the time, be sure to join us as we watch Part 3 at the FilmBar.