Kingdom Come: Deliverance is an open world RPG that aims to differentiate itself from the likes of Skyrim and The Witcher by being hyper realistic. Kingdom Come is set in Bohemia during a civil war in the early 1400s. The general story is one of revenge as attempt to avenge the death of your family.

How realistic is it? Well, most of the characters in the game are actual people, and you can pull up the history on them in the in-game codex. Combat is laid out similarly to For Honor, with a wheel, but instead of three directions to strike, there are 5 in addition to stabbing. Oh, and you can kick, if you didn’t have enough options. Want a cross hair while firing a bow? No can do, you’re going to actually be skillful using it. Then there is the armor, in which if you want to wear plate, you must wear a tunic under it. Yup, KCD has layered armor.

In our E3 demo, we got to experience the first mission of the game, along with a combat demo, and a small skirmish. The combat is difficult but not impossible, and the skirmish was a nice change from most open world RPGs. The mission was the highlight though, as with the Beta if you have it, there are multiple dialogue options and ways to tackle a mission. Should you fail, other options will open up for you down the road to complete the mission. The one in the E3 demo ended up with you having to beat up a drunk who wouldn’t pay for his tools. If you lost the fight, your friends would later help you go beat him up. The animation however could use some work, and the game was clunky. 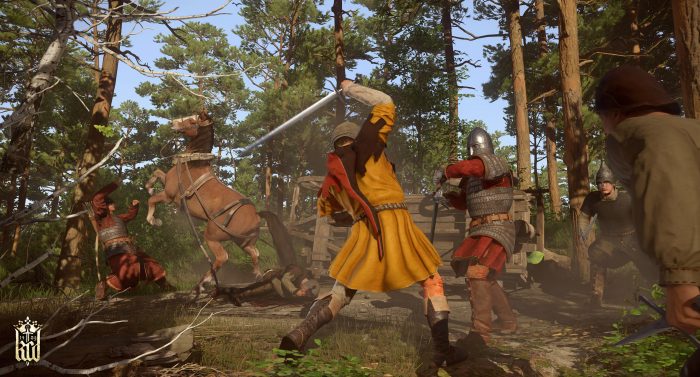 KCD has potential and I’ll be keeping an eye on it, as should you if you are a history buff and like realistic games. Is this the next Elder Scrolls or Witcher? No, it is not.