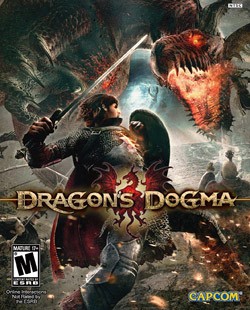 Good Grief the holidays are hard to work around and even harder still to game around.  Well I some how managed and decided to give Dragon’s Dogma a shot.  Was it worth dodging family to play this game?….Just barely.

Dragon’s Dogma (DD) on paper sounds awesome as hell.  Take a fairly large open world with Dragons (Skyrim), have 3 other characters follow you who you can shape and interact with  (Dragon Age), Allow you to grapple and climb on larger enemies to find their weak spot (Shadow of the Colossus) and finally, add a crazy, convoluted and just plain weird story line (any JRPG ever).  How could it go wrong?

Well first let me talk a little bit about the good parts of DD.  The game is pretty open for you to do and handle the story how ever you would like.  There are over 5 different endings for the game depending on how you play and what style you want to go for, albeit 4 of them are obviously bad endings that you can easily avoid but its nice that Capcom at least gave you the option to be depressing.  There is even a fairly robust item creation and weapon enhancement system in place, however as the game goes on you find yourself just buying instead of creating.  Finally I will say that in end the Story was better than I expected, sad? oh yes, weird? totally but at least it was a better ending than some “better” games out there.

Gameplay:  Dragon’s Dogma is your basic quest driven game where you don’t even have to think most of the time, ie.. go to quest giver, go to location on map, kill things, return to quest giver, repeat.  The one aspect that makes DD stand out is the pawn system.  Pawns are your summoned companions that you can use and exchange throughout the game.  The twist is, that all the pawns you see and recruit are made by other players and while these pawns accompany you they earn experience that they can in turn take back to their “Master” or player who created them.  Obviously the amount of pawns available to your disposal is infinite and finding the right one to accompany you (pro tip: Get a Healer) can be a rewarding but is a chore.  Once you have fill your roster with pawns, one you create yourself and 2 from the “Rift”,  its time to go out and kill a dragon.

Story:  Born to a small fishing village you have lived a simple life, until the DRAGON appears and starts attacking your town (oh no!).  Upon being killed by the attacking Dragon, it then senses your “awesomeness” and takes your heart (literally) with a challenge to come and face him if you want it back.  Having your heart taken by the Dragon turns you into what is called the Arisen, as you are technically a zombie, however being the Arisen allows you to summon the pawns to aid in Defeating the Dragon and saving the world.  All of this makes for about 2/3 of the game as once you defeat the Dragon (Hey how about a Spoiler alert?! Shut up, what the fuck do you think you would be doing in this game?) you then go on to challenge your government, the world and even the heavens.  Easily the last 1/3 of this game are the most enjoyable in DD, its just too bad you had to trudge through the first 27 hours.

Graphics:  Ok, Here is where I will start to gripe a bit as the graphics are quite horrible. Now, graphics don’t make the game, but when you don’t have an overly strong game already its hard to get past.  The clipping in this game is absolutely horrible, go into any church in the game and walk straight through the pews.  Watch as your pawns get enveloped by a griffin and cant be rescued since they are inside the attacking griffins chest cavity.  Thankfully the clipping applies to your pawns weapons as well as I was impaled a billion times while my “help” flailed around like mad men.  Hair is absolutely horrid, Even in Final Fantasy 7 or other PS1 games the hair at least moved, in DD its a solid mess.  Finally do not look at anything closely (or at all) as everything looks like it was made in the lowest resolution possible how this passed as a current gen game I have no idea….at least the capes look nice…

Sound:  There seems to be only 3 songs throughout the entire game.  The calm walking music, that only plays very rarely, the attacking/adventure music and finally one of the most amazingly out of place theme songs ever made.  Seriously, listen to this:

If I were to tell you this theme song is a bout fighting Dragons in a setting much like Skyrim would you believe me? HaHa.  In all honesty I actually like the song, it is just so over the top Anime style, and if DD was made into an Anime I would expect it to keep this theme song.

Gripes:  This section may be a bit full as I’m sure you have already picked up, DD wasn’t my favorite game this year.

Overall:  I cant say that this was the worst game I have ever played but is that really an award a game wants?  “Yay! We are not the worst!”.  Like I said if you can stand 25 hours of lame fetch/kill quests the last 15 hours are fairly good and entertaining, especially if you like over the top crazy convoluted endings and really fun boss fights.