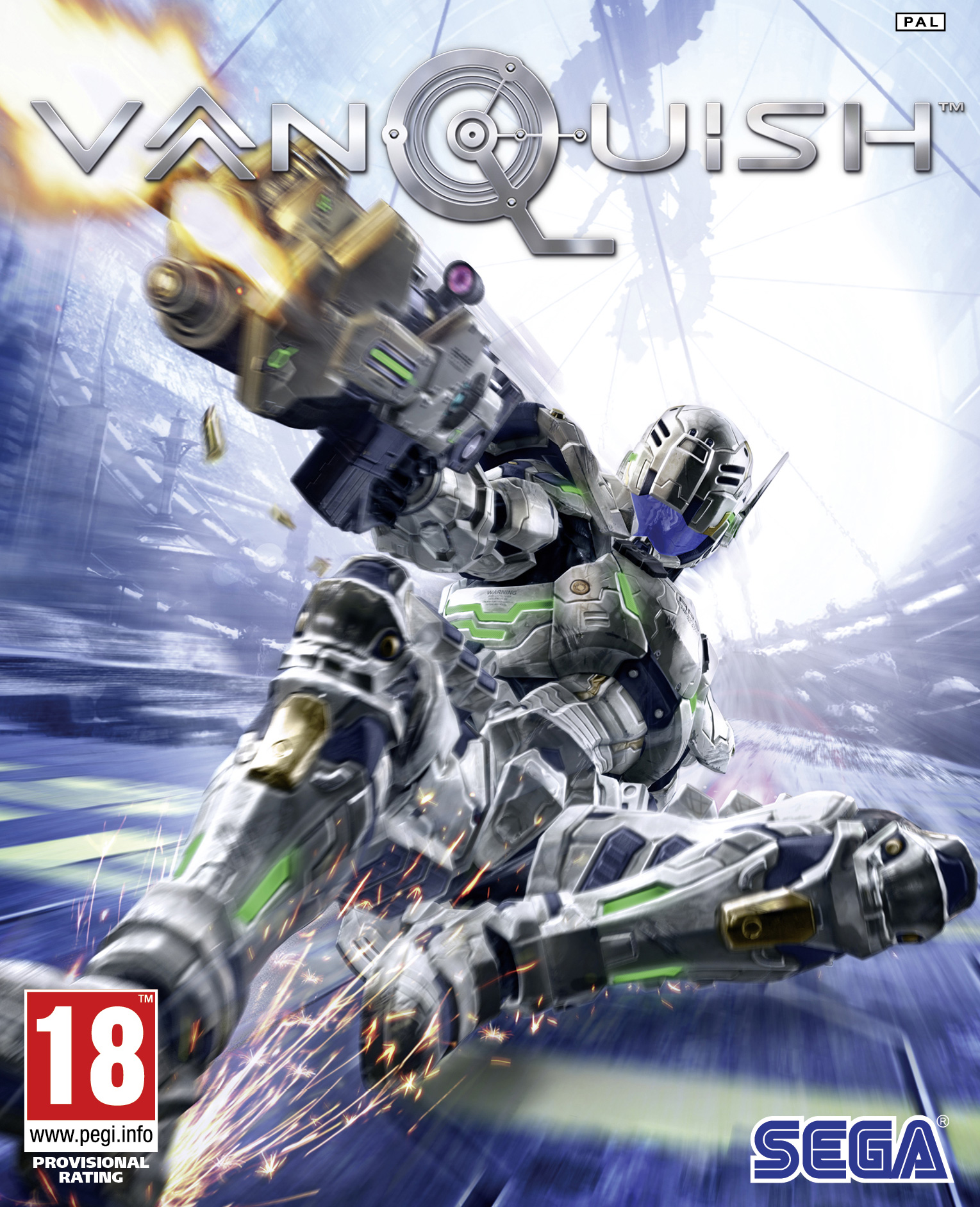 I guess I’m on a scifi shooter kick as this is my second one to blast through recently.  Vanquish is just as you would think, another 3rd person shooter set in some crazy futuristic world and a hero with some suit that makes him all bad ass.  In all honesty this power suit was what I was hoping Crysis would have been more like.  Supreme Ultimate Power…with itty bitty energy.

Vanquish was released with a small pop, nobody really paid much attention to it but it sold fairly well, with pretty good reviews.  Mostly because of the visuals, the game is super slick and very futuristic.  A nice change is that everything is white and super bright, rather then the typical brown/dark color palate, this style really helped the futuristic vibe of the game, kinda like Ultraviolet…. but less horrible.  Everything had that fresh clean future feeling too it and the entire saga felt like something out of Gundam with giant robots and space colonies to boot.  As a bonus Vanquish also has one of the coolest start menus I have ever seen in a game ha ha ha.

The game play is fast, very fast, the enter system is set up more like a arcade game rather than a shooter,  every mission would end with a rank based on how well/ fast you completed it, and there are a few achievements/trophies given for speed runners (Something way more popular overseas).   Because of this the game feels a lot more stressful then it needs to be.  About half way through the game, the fucks I were giving for speed went away and I started to take more time to get stuff done and be more methodical on finding weapons, ammo and secrets.  It was obvious that the game wasn’t meant to be played this way but it made it more enjoyable for me.

Story-wize the game was lacking, but it was just enough to keep you going, what more do you want when you are blasting your way through hoards of killbots at a pace that makes you scared to blink.  Playing on hard was absolutely a challenge as well as some boss battles were very over the top and required very quick reactions/ luck to complete (patience helped a lot as well) although I found myself having more trouble with mini-bosses then anything else.    All of Vanquish felt like a campy anime, with over the top visuals, a crazy storyline set in the future, Giant robot boss battles and even voice work by Steven Blum (google him if you care).

All in all I enjoyed my short time with the game, it was a lot of fun but very short.  Im sure I could have beat it a lot faster if I wasn’t playing on hard, however I don’t believe I will be playing this one again.  If you are a anime/ scifi fan I would for sure recommend picking this one up on the cheap as you will enjoy your fun weekend.  Everyone else should keep on walking and go get another copy of Gears.