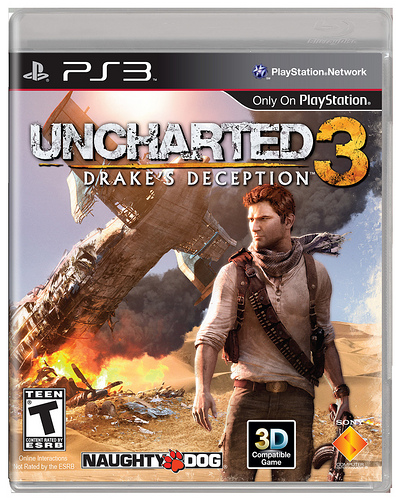 Time : about 13 hours for a single playthrough not including co-op or multiplayer

Its very rare for me to make sure to get a game on release day.  Usually I will wait for used one, or wait for price drops before I pick up most games, even if I’m excited about a game Ill usually wait a few days or weeks before making the investment.  However, when I hear that a New Uncharted game is coming out I wet my pants in anticipation and grab it the second I have the chance.  Excited as ever I took my plunge into Drake’ Deception.

Graphics – If there is one thing the Uncharted Series and the people at Naughty Dog do well, its definitely the epic Hollywood experience, each game has brought it to the table and Uncharted 3 did not shy away from this trend.  The level of detail in the characters is still astounding and the exotic locals are always fresh and beautiful.  The entire level on the Cruise ship was amazing, especially how everything interacted with the waves and the ship, really reminded me of the awesome Train level from Uncharted 2 and just as well done.    The overall scale of the game feels a lot grander than the previous games as Naughty Dog did a great job of showing you just how far you have to travel and not just in compartments or “zones” like in 1 and 2.   Small little touches also caught my eye, You can grab/climb a lot more/take other paths then just the “correct” path, makes exploring a lot more fun as you can grab onto almost anything, also Treasures that you find throughout the game are now fully rendered, rather than just a glowing spot.  Obviously the game itself is beautiful, but you know that already.

Playability – Drake handled as well as ever and his motions and expressions are as spot on.  Little things like touching the wall while running or slouching after taking a big hit really drive the experience of watching this character and helps you think of him as real rather then the super lucky bullet sponge he is.  I will say however that climbing didn’t feel as fluid as in the previous titles and there didn’t seem to be much variation, like climbing puzzles or crazy climbing scenarios, don’t get me wrong the climbing was fun but it just seemed to be regular climbing just more fancy (what?).  Fighting has also been more simplified to be more of a action button sequence rather than slowing down the action for you to make a move.  Fighting was also a lot more satisfying as the animations were not always the same, and the brutes were always fun to take down, especially the one on the plane.

Melee and stealth played a bigger role this time as the enemies seemed much smarter, grenades were used all the time to make sure you didn’t just hunker down behind cover, and I’ll admit I was caught off guard a few times by them flanking me.  Besides if you got caught in a stealth sequence the enemies would come out of the woodwork, so, keep it stealthy ha ha.  Some things that bothered me with uncharted 3, is the lack of extras.  Remember in Uncharted 1 and 2 you had the option to add skins to Nathan or “cheats”.  I haven’t come across this at all in the 3rd..  maybe it comes when you start a 2nd play through?.  Also the Medals section is gone, where you could check on your Trophies or other accomplishments you’ve done in the game, its been completely removed.  I couldn’t help but shake this sinking feeling that they got rid of a lot of single player stuff to make room for more multiplayer stuff.

Sound –  As usual the voice acting was top notch and the music fantastic, shoot they are even trying to sell the soundtracks on the PSN.  Ill admit I wouldn’t mind having the Uncharted theme as my ringtone ha ha.

Story –  The Uncharted 3 story and I have a love hate relationship. This time around is no where near as strong as Uncharted 2 but the more I think about the story the more I realize and it does get deeper.  However a lot of the story has me asking questions and wondering what they were thinking or why they didn’t explore their options further.   This was however the first of the 3 games that really focused on Drake, not just as treasure hunter but his past and, really, his weaknesses.  It was also the least comedic of the 3, Uncharted 2 had a few choice moments where Drake’s Snarky side would come out, and was usually a good chuckle, we never really had a chance for that in 3 but I believe it was more of a story choice than a flaw as I think they wanted Drake to look “week” and not as cocky.   As usual This adventure takes you on a crazy trek all over the planet and to out there locations it was kind of a nice change that some of the locations were inhabited and not just another ruin or jungle.

****SPOILERS! SPOILERS SPOILERS****  ok now that all the lame-os are gone let us cool people who beat the game talk about some of this bullshit.  What the fuck was up with the spiders? They were a constant threat throughout the entire game then poof…nothing more about them. I mean they even had a spider in the secret library so I was thinking they would be the source of the “hallucinogenic” or whatever was in that “Brass Box”.   What the fuck was up with the tarot card in Cutters pocket after he jumped off the burning tower?  I mean they all saw it, so it wasn’t a hallucination but they never addressed the fact that Marlowe can apparently see the future!?!?

Also in the scene right before this Cutter shoots Talbot but Talbot is there fine as day in the next scene,  I have come to accept that Cutter didn’t shoot Talbot as it was probably a hallucination but what allowed for the other three to getaway then?  Finally Later in the game when Drake is captured by Marlowe we learn that Nathan Drake isn’t his real name? I would think its because Nathan claims to be an illegitimate heir to Frances Drake so obviously his “legal name” wouldn’t be Drake, but it would have been nice if they cleared that bomb up instead of skipping right past it.  Also why mention 007 and then not bother exploring that again?

Obviously if you have a PlayStation 3 you are going to play this game and you will not be disappointed despite its flaws the game is still one of the best games of the year and I can’t wait to see what Naughty Dog does with the series next.