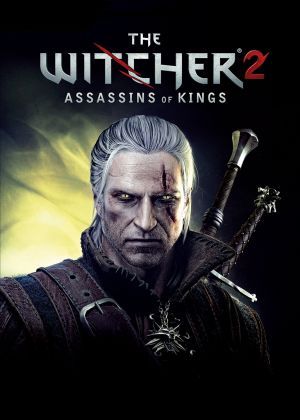 The Witcher 2: Assassins of Kings

The Witcher 2 was one of those games when it first came out where I said “oh I like the look of this game…buuut I don’t $60 like it”. So I waited a bit for my cheap ass to get on board the Witcher train and what I found was a very in depth story line with fantastic choices, what I also found, is sometimes, this is not enough to make a great game.

The Witcher 2 Assassins of Kings may be a sequel but it is not necessary to have played the first to get by or enjoy the second, same goes for the yet to be released 3rd game.  Basically you play as Geralt of Rivia, a magic/genetically mutated humanoid known as a Witcher, and it is your job to save your ass (and if you choose the asses of those around you) in a surprisingly deep Medieval political drama.  You see, Geralt has been framed for the murder of a king and is on the run to either prove his innocence or kill everyone in his path the choice is up to you to either care about the world around you or blast through for your own means.  The story and choose your own adventure feel of this game is easily the best part and can warrant multiple play throughs in order to see all 16 different endings. Upon finishing the game I could see plenty of parallels between The Witcher 2 and Game of Thrones,  Plenty of back stabbing, lying and boobs.  But, just like GoT has its filler episodes, some quests of the Witcher 2 are played out boring kill quests.  Long story short if you like GoT its a pretty fair guess that you will enjoy the story of the Witcher 2.

Graphically Witcher 2 looks both amazing and horrible at the same time, the character renders in the game are well done as most character models look very good, even close up, but at the same time it seems to be missing some polish.  On some characters you can actually see the “movement” neck line where the torso ended and the head began, also all movements feel very forced and even clunky, especially in cut scenes.  Also of the 3 areas you can go (that’s right only 3 areas) only one is very detailed or has that “wow” factor the others are pretty plain and muddy looking.  However, The main problem, that trumps all other graphical hick-ups, is the Clipping.  Seriously they might as well have called it The Witcher 2: Clipping of Clipping as it felt as if they didn’t even bother to check for it.  For example,  Trish’s hair would cut into her face, HER FACE,  almost constantly, weapons and armor would pop out behind other pieces of clothing, Geralt’s hair would pierce anything it touched and swords would sometimes swipe through enemies/items as if made of air.

While I’m bitching, the gameplay was also very lacking.  Combat came down to really only one or two button presses and once you learned how to block/counter battles became mostly quick time actions and too easy.  Granted, you could use other items to make the combat more “exciting” but why go out of your way making things when just blocking and counter works just fine?  There is a very robust item crafting and alchemy system but, like I said, the process of checking/buying blueprints for things is a mess and takes waaay to many menu clicks to see what is going on or plan on building things.  I also ran into far too many map errors to count, where the objective marker would show a location, but where I needed to go was another location plus the map wasn’t any help…Ugh don’t get me started on the map.  All in all from what I understand this is still a great improvement from the first Witcher, but it still felt like the “game” portion of the Witcher 2 was not the top priority, if the story wasn’t as good as it was, I most likely would have walked away.

There also is surprisingly a very limited amount of music that actually plays all the time there were plenty of times where I would be running around with no music what-so-ever.  Now I’m not saying that music is always needed but its worth pointing out.  Also the voice work in the game is quite good.  Geralt’s “I don’t give a shit” mentality comes through very well in his gruff low voice.  Polar to Garalt there are horrible voices as well, but thankfully they are mostly contained to small characters, I couldn’t stand Dandelion.

Now before you go off thinking I hated the game lets remember that the story is really well done and your choices really do take effect on what happens next, it is this reason alone that I am holding onto the game and will most likely play Witcher 3, whenever that does come out.  However, although I am keeping the game I don’t know if I will ever really choose to play the game again, if I’m being honest, and as I stated before Witcher 3 wont require a Witcher 2 playthrough so you may even want to pass this one up, unless there is another slow summer.

6 thoughts on “The Witcher 2: Assassins of Kings”