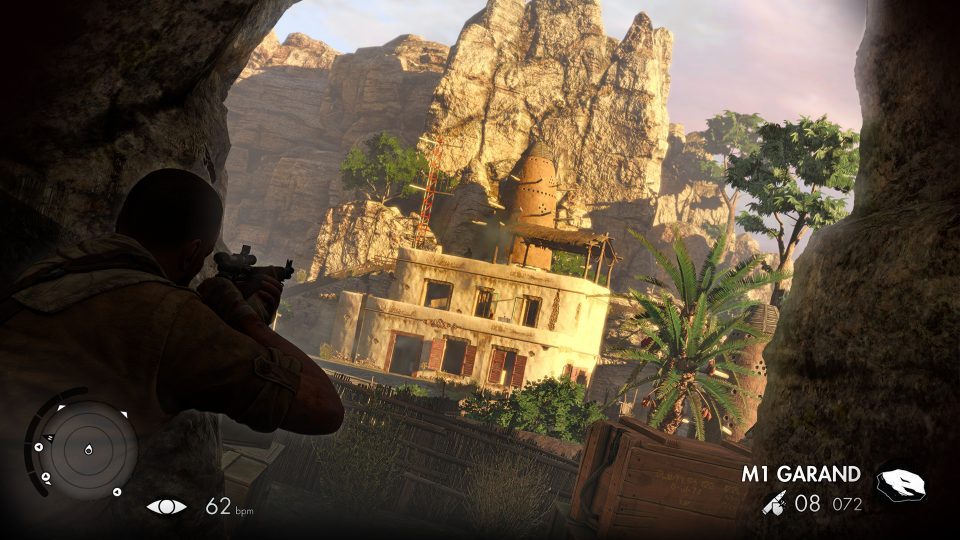 Stay hidden and wait for the perfect time, always better to take it slow

Gameplay:  Set in Africa during WWII you play as Karl Fairburn,  Sniper with a death wish, as you take on the entire German forces in Africa alone.  On your journey you will infiltrate strongholds, sabotage air strips and even destroy entire manufacturing facilities, with little more than your trusty rifle.  The real glitz and glam to Sniper Elite comes from the X-ray bullet time kill shots, nothing is more satisfying than pulling off a long shot and watching a Nazi’s head explode.  Granted the novelty of this effect does wear off about halfway through the game, it can be turned off or skipped, but I found my self even after 15 hours of playing, enjoying the slow-mo every once in a while, just to see how awesome my shot was.  Aside gunning down Nazi’s as you see fit, the main idea for the game is to be a “ghost” and not be detected.  To achieve this requires some actual planning on your end,  deciding what enemies to take down first or waiting for all enemies to expose their routes before rushing in with the kill.  Another step to take is to make sure your shots are covered by another sound, like low flying planes or the loud clanking of a nearby generator.  Let me put that in another way, in order to get anywhere successfully you will need to wait and wait and wait, and actually this is quite possibly the most “real to life” aspect of Sniper Elite 3 as most of the game (if played correctly) is spent waiting for the perfect time to take a difficult shot.

Graphics:  Sniper Elite 3 is very crisp and Karl is extremely detailed with how light interacts with him.  That beings said, the game in total isn’t very graphically complex, there is really only 4 or 5 character models and every level is basically just brown desert.  Another thing that surprised me was the limit in draw distance, for a game that is all about sniping and long shots it was sometimes hard to see further than what 505 games and Rebellion wanted you to see.

Sound:  Shots from your rifle, especially in the slow-mo sequences and the sound of a bullet slowly working into a Nazi’s brain (or testicles) is extremely gruesome and satisfying.  The only music in the game is only in loading screens and the title screen, which is fine, but you think they would have used the extra space to have the Nazi’s say more that the same 3 things.  Also what is the deal with main characters right now all sounding like they are Berry White?  I mean I know people want to have the character sound all “rough and tough” but its starting to be a bit cliche.  Why not have a Seinfeld sounding sniper? “Whats the DEAL with all these Nazis? Do they KNOW they are being shot at?” LOL Soup Nazi boss battle…

Story:  If you need more than, ‘There are Nazis here and you need to shoot them’ you will be greatly disappointed in the story. Sure there is a bit about a hidden tank manufacturing facility, but who really cares when you are popping of head shots at 200+ yards.

(if you need more than this to play the game, move along)

Gripes:  Thankfully 505 games and Rebellion knew they did not have a AAA title on their hands with Sniper Elite 3 and gave the game a lower price than normal PS4/XBOX One titles, however that still doesn’t change the fact that it is buggy as hell.  Dead enemies would talk once you got close to them, Enemies would constantly Stand in each other, like two people in one spot, shots being blocked by invisible walls, I could go on but needless to say its not perfect.

Dumb AI, aside from the bugs the AI is painfully sad, when an enemy spots a dead body it walks over to it, looks at it like “Who did this to you” walks around for a second, then returns to his routine like nothing happened. I mean at least call in support or go into an alert phase. Enemies will also walk into a fire and die looking for you.  In one level I was able to stack up about 10 bodies in one spot simply because enemies kept walking up to the same dead body and then I would shoot em, thus adding to the dead body pile.

I said it before but Ill say it again the story is lacking, so don’t pick up the game expecting an epic journey across Nazi controlled Africa, the point here is to shoot them as flashy as possible.
(Seriously getting that perfect moment makes you smile every time)

While the game is far from perfect I had a lot of fun with it. At times the weak story and lame AI can be frustrating, but I found it still easy and rewarding to find that perfect spot/moment to take some far off Nazi S.O.B down.