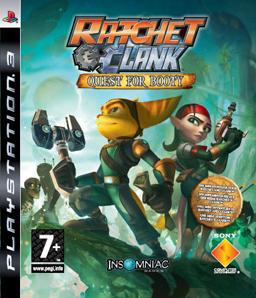 Ratchet and Clank: Quest for Booty

Difficulty felt:  Easy, Easy other than some bad platforming

I’ll admit it; I never really played Ratchet and Clank when they came out on the PS2.  I always thought that they looked a little bit too childish in game play and I was in a platforming lull at that time.  Not that platformers were necessarily bad I just lost interest somewhere during the transition from 2D to 3D.  After I started rummaging through some of the clearance sections at CompUSA, when I worked there, I decided $3-$5 was a good enough price for a game that I may or may not end up liking (worst case, I sell it to GameStop and most likely get my money back).  After playing them, I will admit that they definitely vastly improved on the platforming elements, mechanics and control.  The biggest addition to the line-up was, IMO, the tremendous arsenal of weapons that you use throughout your quest.

That entire back story has a purpose.  Once the R&C Future series came out, I jumped at the opportunity to play them as soon as they came out.  Tools of Destruction was a great title with a very in-depth story, a plethora of new weaponry to to destroy the enemy with and solid platforming by utilizing the combo skills of both Ratchet and Clank.  I loved the game, and relished in trying to find all of the gold bolts and finish off the small side missions (including obtaining all of the parts for the games ultimate weapon).  I can say the same thing for game number 3 in the series, A Crack in Time.  There is a ton of back story, plot twists and side missions to keep any gamer entertained for a while (not to mention my wife thinks that the robot is cute so I’ve been allotted extra me time to play the game because she liked hearing some of the dialogue).

If you read back a couple of sentences, you will notice that I went from 1 to 3 as if there was nothing in between.  After Tools of Destruction, Insomniac games decided that they wanted to try their hands a game strictly for digital distribution, with an already established franchise, that would be cheaper and shorter than a full retail packaged game.   The product of this is Quest for Booty, a game with a good enough story but is lacking in almost everything that make a Ratchet and Clank game fun. The game picks up a bit after the first game with Ratchet trying to find where the Zoni have taken his friend Clank.  You’re tracking down the treasure of a dead Space Pirate, Captain Darkwater, which will supposedly help you find out where your pal Clank is.  The story itself is engrossing and straight forward, like a lot of the games in the series, but where it really falls short is in all of the items that made the other games so fun.

First off you only have about 1/3rd of the weapons that are normally found in the other games, and some of them aren’t even the really good ones.  It would have been better if they allowed for you to import all of the weaponry that you accumulated in the previous game.  And yes, I did still have my save file on my PS3.  With the subtraction of Clank from the series, platforming with Ratchet was made quite a bit more cumbersome.  You no longer have the ability to use Clanks backpack propeller to save yourself from a slightly misplaced jump.  Your only recourse for saving yourself is with a double jump, which in my experience only work 3 of 4 tries, causing a missed jump or a fall into a bottomless pit.  Some of the controls are a little wonky too.  Since there is no easy way to move slowly, it can take many attempts to complete a simple balance beam platform.  While the story is straightforward and easy to follow, doing this removed any chance of sidequests and fun extras that make playing a game feel worth the investment.  Probably the biggest WTF moment I had though, was getting to the very end of the game, finding the treasure, and then never REALLY knowing where Clank is.  The story has no impact at all in the gap between 1 & 3 and realistically could have never been made in the first place.

All-in-all, the game was kinda fun but was a major let down for anyone that played and loved the other games in the series.  I would suggest anyone that wants to try this game either wait for the PS store to deeply discount it or get it for free (like I did with my European Playstation account during the welcome back promotion).  Was it worth the 6 weeks  I had to go without PS Online?  Probably not.  Was it at least entertaining?  Sure, I had a fun time for the most part, but I still wouldn’t have paid for the game.  Nevertheless… I BEAT IT FIRST!         ~EVK

4 thoughts on “Ratchet and Clank: Quest for Booty”