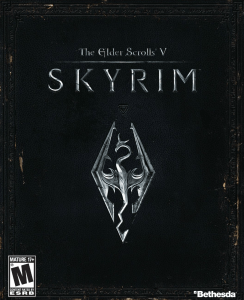 Skyrim and I have had a love/hate relationship since it was first announced a few years ago.  Bethesda has been playing with my patience when it comes to glitches (see Fall out New Vegas) for a while now so when Skyrim was first announced I was very nervous to jump on the “Cant wait” bandwagon.  However, I loved the crap out of Oblivion and was itching for some good ole FPS(First Person Sword) action.  Finally, I decided that I would not buy the game in a feeble attempt to boycott against glitches.  I was able to hold my ground until it was presented to me for free, values or not Free is a hell of a good price to play a game…any game.. Well Was it worth my wait?

That’s a tough question to answer.  On one hand I enjoyed my time in Skyrim, on the other the game isn’t the “perfect game forever” some people seem to be clamoring about.  To show what I mean lets do something different then most of my other reviews.  Ill split some of the categories in to two segments, Levels 1-30 and Levels 30 and up,  as level 30 seemed to be the real tipping point for myself on how I view this game.

GREAT GLORY BALLS OF OVERLOAD!  There is soooo much to fucking see and do.  The quests are unending and some of the plots for side quests were even better than the main quest.  Seriously, you enter the world ready for action, ready to find shit, and ready for all the possibilities.  Literally, the world is yours!

Read this as if you are reading my thoughts while playing.

FUUUUUUUUUCK here is another damn cave, I could just “discover the location” and come back later….meh fuck it lets go in.  Oh look! More Falmer/Draugr, good thing my sneak is at a 10000, ill just walk up to this guy and blast him in the head with my Bow/Sword/Spell/Dick and move on.   *20 mins later* Good grief how long is this cave, Oh good another booby trap lets see what this one does as the damage I receive is minimal.  (Seriously, its more fun to see the creative booby traps then to spend the time avoiding/disarming them at this point)  Ha, spikes, brutal, well lets keep going.  Ah Finally a enemy that takes more then one hit from my Bow/Sword/Spell/Dick, that must mean I’m at the end of the cave….Yup, the map now shows that this location is cleared, good, lets see what loot I get in this chest….STAMINA POTIONS AND IRON ARMOR!  SERIOUSLY?! UGH!.  Here, CHEST!, take my other stamina potions that I have, they are yours as well since they are 100% useless now, glad to get the extra space in my inventory anyway ugh.  Boy I sure am glad I went in this cave.. it actually cost me money.  Thank God there is always a “secret exit” back to the entrance otherwise I’d never bother.  Exit back to Skyrim…..Oh look another cave…

Seriously the best part of the game.  Skyrim is obviously one of the best looking games currently available on all platforms.  The most noticeable difference from Oblivion is the upgrade to the quality of the NPCs, as they all look different and well rendered.  I didn’t see any important people duplicated other than the basic mob ie full gear soldier or creature.  Also amazing is how well the game handles all of this detail. Although the load times are a bit lengthy they are not nearly as bad as I would have thought them to be, especially after installing the game.  (Yes, after the most recent update it is now safe to instal your game on the Xbox 360 so do so if you have not yet.)  Side note: I was also surprised that this game was not multiple disks on the Xbox.

No Seriously the game is gorgeous. I still will find myself on top of a mountain, with a waterfall and snow falling, stopping to look around and be like “dang this is cool lookin”.  However DO NOT look closely at anything, especially in caves/dungeons, the textures get real ugly, real fast. Although at this point you just no longer care about the details and you just wanna get it done…whatever it is at the time.

Sound: Not really dependent on your level so just think of it as the same throughout.  Personally I enjoy the subtle music when you are running through the forest or the sudden change in tune when you start to attack.  All the sound effects are spot on as well,  Arrow attacks are satisfying when done stealthy and the sound of your sword piercing flesh is as brutal as it looks.  However, the highlight in sound is when you are dealing with Dragons,  The Music during battles: awesome, the music when you kill a Dragon: Epic, the Music when you get close to and discover a new Dragon shout: THE MOST EPIC MOMENT DURING THE GAME.  I don’t care who you are when you year that low chant once you are close to a Shout wall oh ho ho so good. AH AH AHYAAA

If you don’t know by now the game has a shit ton to do and you will never, I say NEVER, complete everything as the game will constantly “create” new miscellaneous side quests for you to do, hence why you can never actually “Beat” all of Skyrim.  These side quests sometimes will surprise you with amazing rewards or quite a cool side story dealing with murder, demons, theft, you name it, sometimes it can even be a nice distraction just to forget about your main quest since its on the other side of the map. Skyrim has the best set up for crafting then any of the previous Elder Scrolls games…Seriously.   Alchemy, Smithing, Enchanting are all a lot more involved and easier to get into.  Making your own potions and armor is fun, rewarding and allows you to make them to your exact specifications.  Nice.

You will hear me say this a bunch..FUCK IT.  At this point in the game you have more money and items then you know what to do with.  I get more money from all the shit I bring in to stores than I do from any quest reward.  Money is literally flowing from my veins.  I even covered a bed in one of my houses with gold and Jewels where I live like Scrooge FUCKING McDuck!  At this point I don’t even pretend to care about all the ingredients I can pick up over the world as spending more than 5 seconds at an alchemy table is a waste of time. Heck that .01 weight adds up and could prevent me from carrying another staff of Paralysis (otherwise known as the I win staff).  I also have more Soul Gems then I know what to do with….Maybe Ill make a Soul Gem bed as well…. to go with my money bed…I like it…. 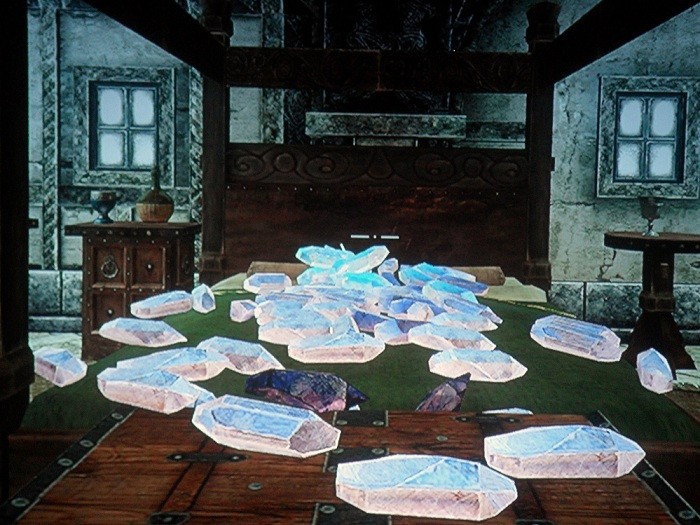 Gripes:  Ok seriously the quick change menu is super week.  Luckily I’m not a super mage but even switching between weapons is kinda slow and lame,  yeah its nice that you can tag anything as a favorite but why cant we have a spell wheel or some kind of quick swap option.  Like remember in Dragon Age when you could have a bunch or spells or macros set up ready to go on the fly with a push of a button…that was nice, and would have been nicer to have in this huge ass game.   Obviously if you read my crazy review above you now understand that the monotony of ALL the dungeons you will encounter quickly starts to take its toll in the later levels, but something about this game makes you go through it again and again.

Glitches:  My main concern with the game and I honestly believe that waiting this long to play really helped me avoid all of the major downfalls.  But I was far from unaffected by the mass amount of glitches.  Skyrim has so far frozen on me 3 times, once when I first started the game.  I have see 3 flying horses and a slew of clipping errors or people stuck in the floor.  Most other glitches are towards my benefit such as Enemies not wanting to walk through a door or when they fall off a platform they no longer fight.  Also the great Ill just stand on a rock and blast them in the face why they still try to come at me.  Other then that I cant say that its been too bad, I still hate the fact that these glitches exist but it was not nearly as detrimental as I was fearing.

In the end I could ramble about this game Ad nauseam, so yes I did enjoy my time with Skyrim and as the title suggests I have not nearly done everything that I want to in this world and that alone is worth the price of admission.  If you are like me and one of the last 10 gamers on the planet who haven’t played this game yet you might as well wait a bit longer to get it super cheap as the wave of people who get tired of playing this game will be coming soon.  Just remember that because of my obsessive need to do everything in a game that any quest you play I BEAT IT FIRST!

4 thoughts on “One does not simply BEAT Skyrim…”