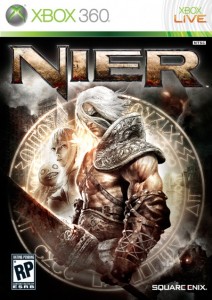 Difficulty felt: God hard, but once you can use spears it becomes SOOOO easy

Nier…. Hmm another one of the Bastard children from Square Enix.   Square Enix/Square use to be a publishing company who would only release gold but now….meh, but that’s another topic all together.  Sorry for the delay in this post I actually beat this game…I think a few weeks ago but have not had a chance to sit down and let all 6 of you know.

Nier was actually a very nice game, that tried to do too much for the game type that they were aiming for…it was as if they wanted to combine God of War with Final Fantasy.   The game also got a M rating that was obviously given to them so they could “appear” to be hardcore but its solely for the random mother fucking cocksucker drops.  The blood is almost pointless since %99 of the enemies you fight are called shades and don’t have a real body…but they bleed…GOD do they bleed…. Also your side kick wears almost nothing.

As I mentioned already the Game is more like God of war so you have your attacks and magic to use in interesting ways and the combat does flow…just don’t expect any awesome combos or quick time events.  Outside of combat this is another Final Fantasy game, find new weapons, level up, visit towns, run errands for other NPCs for money and a super sappy story line.

The Graphics are nice and some of the bosses sport some awesome detail but the locations are forgettable.   At this day and age it always blows my mind that when you change armor or weapons that the character doesn’t show the change as well, thankfully this game is not like that and any weapon changes you make do effect your look and combat.  Also the Main character is ugly and I’m talking cave man ugly, like, UGH dont look at it AAAAAGGGG.  If that was intentional then props to the design team…if not bleh.

The game its self was ok, you are trying to cure your daughters incurable disease by following a magical book around the word to find more magic and of course as soon as you collect the “cure” your daughter is kidnapped.  Mostly forgettable but it is a spanning story with plenty to do.  I hear that you can beat just the story in 7-8 hours but the game offers plenty in side quests, sub bosses and gardening…yes gardening to eat up more of your time.

Some odd things I wanted to point out:  Even though the game has voice acting there are some parts where it is just text still…no big deal right…well it is when half of the conversation would be in text and the other half would be voice over.  I mean did they forget to do the rest or didnt want to pay for it?  Also like I said before the game was hard at first, super hard.  I believe it took me 4 tries to beat the first and second boss, however once you buy your first spear it is so over powered that the rest of the game is a cake walk.  The last two bosses were the quickest/ lamest battles in the game.   Lastly the “end” of the game is odd you have to beat the second half of the game multiple times to show more of the ending for other characters…but why only half of the game? and who cares?  shouldn’t the endings be based on what you do and not on how many times you beat the second half of the game?  Also ending “A” sucked…just to let you know to be ready for a let down.

Lastly, re-reading this sounds like I was harping on the game, however I quite liked it and since its older it can be purchased for super cheap!  I wouldn’t recommend it to impatient people however (boos) but the normal RPG’er or someone wanting to get into RPGs might like it as well.

Just remember, I Beat It First!