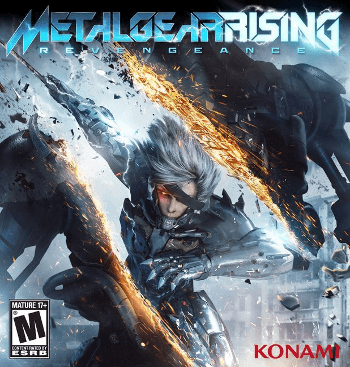 Time to complete: 6 hours in one day.

Let me first start off by saying I am a huge Metal Gear Solid fan.  I have loved the MGS series since it came out on the PlayStation and have always purchased every game in the franchise on day one (even the Metal Gear Acids).  That being said ever since the end of MGS 4 I’ve been super excited for Raiden to take the center stage and show off his moves.

Metal Gear Rising: Revengeance was never meant to follow the foot steps of legendary super soldier Solid Snake, and as a matter of fact, nobody in Metal Gear Rising ever even mentions him.  Metal Gear Rising was made solely for non-stop Lightning Bolt Action with your friend Raiden.  Imagine a Devil May Cry style game centered in the Metal Gear world, sounds awesome right?  Well it is, if its exactly all that you are looking for.

Story:  Taking off with the War Economy theme from MGS4 there are now more Private Military Contractors in the world who make a living off of war and chaos.  And what better way to make war and chaos than have a bunch of supped up cyborg ninjas terrorize the world.  While Raiden claims he is protecting the week, the body count he leaves in his wake makes it harder and harder for him to see the line between good and evil.  But lets be honest, if you are looking to play this game you already don’t care about the story you just want some sweet sweet HF blade cutting action, and believe me boy, you gon git it.

Gameplay:  They were not kidding when they said “Lightning Bolt Action” battles in this game are fast and intense.  Battles with normal enemies are mostly just button mashing until you get the prompt to go into Zandatsu mode (think bullet time with swords).  While in Zandatsu mode you can slice and dice your enemies into ever smaller piles of hamburger. The boss battles however, are as cinematic as they are epic usually involving in some large piece of the scenery being used as a weapon or hurled at your head.  The one major down fall is blocking.  Blocking is done by pressing the left stick towards the attacking enemy and the attack button at the same time….that’s right, you block by hitting the attack button…I’ll let that soak in for a second or two.  Honestly its not that big of a deal as blocking isn’t a major component of most battles but you will feel cheated more than once when your attack becomes a block or when your block becomes an attack.  Regardless of some control hiccups running up a volley of  launched missiles to the attacking helicopter to then slice it up is very Satisfying.

Graphics:  The graphics look slightly better than MGs4 but the main aspect is slicing people up and how small you can get things and how accurate you can be is impressive.  There was more than one time where I actually shouted out “awesome” after destroying something massive in a totally over the top way. Like I said slicing the enemy easily takes center stage and will for sure make you cringe, especially when you leave a body writhing on the floor with no arms or legs.  Can this mechanic get boring, yes, but 6 hours wasn’t enough for me to get tired of it.  Its also well worth noting that the epic feel of boss intros is maintained and feels like it fits well with the MGS universe.

Sound:  The music is an odd mixture of electronica and generic rock however it seems to work as the music in boss battles progress along with the fight adding another dimension to that epic feeling.  The voice acting is also kinda hit an miss, thankfully they got Quinton Flynn to come back as Raiden but even still he doesn’t keep the same appeal and awe that David Hayter has as Snake. (obviously this is my opinion)

Gripes:  Ok the biggest gripe and most obvious is, this game is short as balls. I was able to beat the entire game in 6 hours in one sitting (shut up you’d do it too) and at least 50 minutes of that was the final boss (I died a lot because the blocking button and attack button are the same).  Even for an over the top action game 6 hours is crazy short.  Also, there is almost no reason to play again, sure you can make it harder and sure you can “better your score” but why?  I understand that the score based arcade style is big in Japan but I couldn’t justify $60 on a game this game.
The Enemy AI is horrid, unless you are standing directly in front of them they will not see you and if you are spotted just run around a corner and use the Cardboard box (yes they are back teehee) they wont be able to find you…I mean even MGS1 enemies were smarter as they would at least kick the box.
As I already said this games story is very over the top, not saying it doesn’t make sense or the message isn’t clear, its just painfully obvious that the game was made with the action being the key focus (not that there is anything wrong with that).  I do however wish the game kept with the original premise of being the story on how Raiden went from winy kid to insane cyborg ninja instead of a direct continuation or split off from MGS.

In the end Metal Gear Rising: Revengeance will go down in history as another action spin off like Dirge of Cerberus (ha remember that game? I DO) It took something we all love and made it its own (albeit far from perfect) also, if this game had nothing to do with the MGS series I doubt anybody would ever play it or, if they did make it, they would have made it as a 3rd person shooter…oh wait…. they did make that…