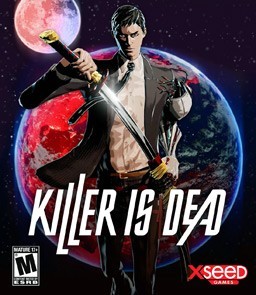 No other game quite shows how different Western and Eastern gamers are more than Killer Is Dead.  With over the top stylization, and an all around story that has you questioning the power of unicorns, Killer is Dead is nothing like you would expect.

Story: Ok…So…You are Mondo, a head hunter who works for Bryan, who is a cyborg, and it is your job to take down Moon demons called “Wires”  because you were rescued by a Unicorn after getting your arm chopped off and it is your destiny to not let the gamers down….Am I making sense yet?  Anyway, the game is broken down into 12 missions taking you all over the world and even to the moon.  Each level ends with an over the top boss fight that is easily the crown jewel of the game… Bug demon coming out of a woman’s vagina? Check! A Samurai’s Tiger Tattoo? Check! A science experiment gone wrong giant? Check!  A runaway train who’s Eyeballs you have to fight?  Check! Check! Each boss is more ridiculous than the last and really the only reason you are there is because a ghost hired you to kill the Wires….Feel free to read this paragraph again it still wont make any sense.

Gameplay:  Killer is Dead is your typical hack and slash game where enemies will drop crystals or blood roses to be used to upgrade your health and abilities.  When you have weakened an enemy far enough you can use your blood (think magic) to decapitate or dismember them in a flashy blood spray.  The first few levels are brutal as most of your combos/abilities are not unlocked and can lead to some very frustrating deaths.  And when I say combo I say that loosely as there are only two attacks (a gun blast from your cyber arm or a slash with your katana) Unfortunately the only real combo is to just keep beating on people and dodging their attacks until you can cut their head off, thankfully the block button actually works well and is useful, unlike a lot of other slashers out there.  Aside from killing enemies blindly all over the world there are date missions, during these “missions” you will sit with a “beauty” and attempt to win them over by ogling them constantly without them noticing.  Using your “gigolo” vision you will need to zoom in on the beauties “sexy areas” to increase your “guts” gauge without being caught otherwise you will lose the interest of your beauty…(I cant make this stuff up). Each new Beauty will give you a weapon mod, so you don’t really want to skip these missions, but Ill tell you what, try explaining this to anybody who happens to walk by while you are playing…

Graphics:  The art style is there and the publishers have taken a lot of cues from their other works (No More Heros) with a bit of El Shaddai.  Anyway the game is super dark, like so dark I had a hard time seeing in some areas, and the camera seemingly did everything it could to get in my way or place me in an awkward angle.  The Art style, while cool at some times, actually does more to make the game look old or dated. I kept feeling that the graphics where not much better than an old Gamecube game called Killer 7, dope game but its almost 10 years old….wait that was made by some of the same people….Ah ok.

Sound:  Aside from some solid jazz music for load screens or mission briefs don’t expect too much more from music.  If you are playing a game like this I think its safe to assume you are otaku, but just in case make sure you play the game with Japanese audio, Not only does it sound better but the American dub is just super annoying.

Gripes:  I actually started off hating this game and was having a hard time getting invested, it wasn’t until the half way point that I finally started to have fun and seeing the appeal, but for a 10 hour game (on hard) its difficult to justify the time I spent for other people.

For being on a current gen system the environments were about as boring as it could be, right down to annoying repeating patterns.

As I said before there aren’t really any combos so once you find a style that works for you the game quickly becomes just a hitting the attack button constantly game.

No jump, its not something that you ever needed within the game but not having a jumb button always bugs me…especially when the “could be” jump button isn’t used at all .

The story line is absolutely silly, obviously not the core of this game, but if its the main reason you play games you may want to steer away.

In the end, the after my 10 hours with the game I did finally come to enjoy Killer Is Dead, but I find myself more elated that I never need to play this game again. For what it was, if you are a big fan of Anime or just Japanese gaming in general you should at least give this one a rent, as in Japan this is currently one of their top rated games… everyone else should stay far far away.
I Beat It First.