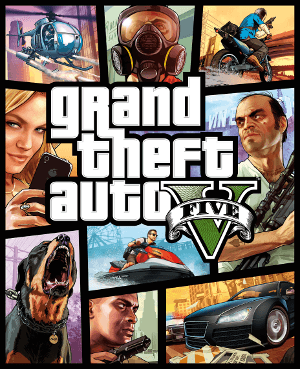 Time to Beat: About 30 hours with some side quests done

Since nobody is able to play Grand Theft Auto Online right now, might as well read our review right?

Grand Theft Auto 5, what can I say about it that hasn’t already been said or seen?  With over $800 Million in sales within the first day GTA 5 is by far one of the most popular games ever made (and it hasn’t even been released on PC yet).  I think Ill just give my views on everything and break it down and then you can yell at me if you don’t agree…Good? Good.

Story:  In all honesty I am on the fence with the story.  I feel they could have done so much more with it rather than just being a bunch of puppets.  Especially the ending, like, why didn’t they do that from the start?  I understand time and space is an issue but each of the characters had one roll to fill and were not very dynamic.  Not saying they didn’t work well, I just feel like there was a lot that could be fleshed out with these guys that they left on the table. But lets look at it on the other side, 50% of the people who play this game probably will never actually beat the story mode.  I will say that I’m impressed on how they could pull all this on the current systems, and I cannot wait for Grand Theft Auto 6.

Graphics:  This game is a fantastic example of what the Xbox 360 and PlayStation 3 can do (and also what they cannot do).  The detail in this game is absolutely astounding from the reefs in the ocean right down to how your clothes move on your body, this game looks great.  Obviously its far from perfect, look to closely at not essential and it quickly becomes a gritty mess.  Also the pop-up can be distracting at times (seems to be worse on the Xbox in my opinion) but 99% of the time you aren’t going to be looking at the trees when you’re shooting down-a-ho.  Also non-main character

Sound:  Top notch voice acting as usual, if Rockstar does one thing absolutely right its voice acting and ever single characters voice was perfect for that character, especially Trevor.  The only down side I have with the sound this go around is the music selection wasn’t all that great.  Sure there were some good songs but mostly it was just “Radio Blah Blah” (heh) but complaining about the radio in this game is like complaining that your ice cream is too cold.

Gripes:  I have a bunch and I’m sure they are mostly nitpicky but let me know if you agree or have your own gripes.  The collision detection for cars seemed off, at times it seemed like I was either in an invincible car that could ram anything down or a car made entirely out of wet paper, nothing was too consistent.

A great thing about GTA 5 is the ability to customize your car and your clothes, but the characters seem to like to change to their own things all the time and force you to go back to your safe house to change, hooray realize but seriously why bother, same thing with cars, spend all this time and money on a sweet ride, come back to the character and the car is gone….why?!?

Its so easy to lose the cops, just drive down a side street and you are good. I like the Line of site idea, but I wish they had a bit more common sense.

Heists are fun and are easily the jewel of GTA5 however I wish the choices you made had a more dynamic impact on how the heist went not just how you handled them, ie no matter what you did you still end up having to shoot your way out.

I hate the grading system for each mission especially since you have to look up every meaning behind their criteria after you have played the mission, as a completionist this does not bode well for me when I do a cool heist perfectly and the game dings me 10% for not doing some criteria that they never mentioned.  Or the time frames, plenty of times I have gone over their “time limit” simply because I did not wish to skip any dialog, lame.  I’m all for re-playability but don’t force me to reply just to get that perfect score.

The end game “game” can be kinda boring.  Once you are done with all main missions and have all the money you can really want its hard to really remain motivated doing small quests for a few hundred bucks.

—
GTA5 is a fantastic game and if you are one of the remaining 5 people who have not yet purchased this domain you may want to think about it as the new GTA:Online should be working soon and will add hours upon hours of game play.  If you are only going to get one game this year this is the game that will keep on giving.