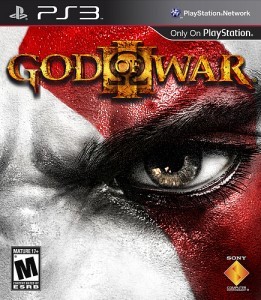 I know I know, you missed the hell out of me didn’t you?  What can I say?  It’s been a little troubling trying to balance writing on here and finishing games with the new job and the pregnant wife, but I swear that I’m at least trying.  I’ve spent the last few months stuck in limbo with some games that I just haven’t beaten, nor found the want to pick them back up again to beat them, so I decided to throw in a game that I haven’t played just because of the shear number of reviews that are already out there.  Should I have played this game way earlier than now?  Probably.  Did I have just as much fun playing it many months after the hype?  Yes.  Read on for my full take on the game.

I’m going to preface this entire article right off the bat, this is in fact a good game.  Why do I feel the need to say this right off the bat, you say?  Because I’m pretty sure that I’m going to rip the shit out of a couple of points so badly that you may think that I hated the game.  Fact is, I’ve liked all of the GoW games except for that shit heap game that came on smart phones.  Sony has always done a very good job of taking classic Greek Mythology and updating it to fit the story w/o removing the core background and bastardizing the entire culture.  GoW3 is no exception and does a great job of bringing together all of the stories and happenings throughout the entirety of the PS2, PS3, and PSP titles.  Some of the story may be lost on you if you haven’t played the previous games (people who never played the PSP titles may not know that Kratos killed Persephone, the queen of the underworld) but in all they do a good job of mixing flashbacks in to explain what happened.  The 1 big difference between the previous titles and GoW3 is the amount of gods killed.  Previously Kratos was content with killing only 1 or 2 mythological Gods and Heroes per game but in this one he kills EVERYONE.  Gods, Demi-Gods, Titans, you name it’s beaten to a bloody pulp; and when I say bloody I mean BLOODY!  Helios get’s his head ripped off to be used as a lantern through the game, Hercules gets his face crushed in so badly that you can barely even tell there was one to begin with, and Hermes gets his legs cut off at the knee so that you can steal his boots.  The game might as well be called Blood of Blood Blood BLOOD 3. 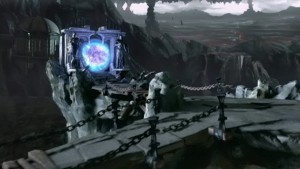 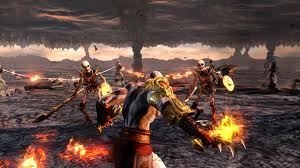 Graphically this is the best looking GoW game there is.  Sure, that’s a given since it’s the first game to be made specifically for the PS3, but even with how great the original and sequel looked when they first game out on the PS2 this makes a great impression.  The Underworld, The Pit of Tartarus, War-torn Earth, they all are extremely expansive and vibrant.  Water and fire effects look good and even the entrails that spill out when you gut a Centaur look pretty real.  They even did a much better job modeling the naked bodies that are highly prevalent in the GoW series (which I’m sure they made a priority).  I don’t really know what else to say other than things were crisp w/o looking completely unreal and things were shiny but not Gears of War overly shiny.  All in all, a great looking game.

This part should have been pretty much a slam dunk for Sony, since this was the 5th game in the series, but there were some drawbacks keeping it from being perfect.  The double jump would not work on some occasions and I would end up falling in to a bottomless pit because my second tap didn’t register or it wouldn’t even register that I was holding down the jump button to glide using the Icarus Wings.  I thought at first that it was a controller problem but the same thing happened with both an original controller and a Dual Shock 3.  The second gripe I have is the weapons that you use.  Not that there are too few or too many, but most of them seem to be rehashes of the original weapon.  The best way I can describe it is like listing off the ingredients used in Mexican food; everything is pretty much the same thing just presented differently.  You start off with the Swords of Athena, the normal swords you flail around with chains that you have used for the previous games, but those are quickly changed out for the Swords of Exile, pretty much the same swords you had before but these ones are on FIRE.  The next weapon you get is the Hooks of Hades, HOOKED swords that you flail around on chains that emit a purple “soul” element.  After that you get the Nemian Cestus, giant gauntlets that you steal from Hercules and proceed to crush his skull with (see my first paragraph) but these too get flung around on chains for some moves.  The last weapon you get is the Nemesis Whip, ANOTHER chained weapon with THREE blades that also attacks with LIGHTNING.  Seriously, it’s like they ran out of ideas after they gave you the sub weapons/items and thought that we wouldn’t notice.  You still get to use the Sword of Olympus but it’s very rare because you have to fill up your RAGE gauge first.

Ok, I’m really going to get up on my soap box for this one and believe you me, Sony is not the only studio that has done this and I’m sure their not going to be the last.  STOP MAKING MAIN CHARACTERS MAGICALLY LOSE THEIR POWERS/SKILLS AT THE BEGINNING OF THE GAME!  SERIOUSLY!!!!!!!  This is probably the most annoying thing about playing any sequel out there and it’s really doing fans a disservice.  Hey there Mr. Player, remember those hours upon HOURS you put in the previous game to build up your characters strength and get ALL of those items?  Well, this guy has a spell that can make all of that disappear in the blink of an eye and he just used it on you.  Have fun grinding your way back up the food chain for another 7 hours.  FUCK!  They seriously need to teach people a better way to continue a story/journey than taking a shit on everything else you’ve done previously.  Wanna add a new weapon to the game?  Make weapons that are so much more badass than the previous ones that the character would willingly say “fuck this POS, I’m gonna kill with this beauty”.   Same thing goes for magic; I would rather have the main character go “damn, I can only remember 4 magic spells at a time.  Guess I’ll have to forget this weak sauce spell I’ve been using so that I can make room for this badass one I just found”.  Seriously, if you expect us to believe that the main bad guy is so much stronger than you that he can cause all of your powers to disappear and turn you into a hapless puppy, you might as well have us believe that he’s so strong he would utterly destroy us in our beginning state and we need to get stronger still.  I’m not sayin’, but I’m just sayin’; yah know?

Other than that imagination fuck that gets thrust upon you at the beginning of the game, the rest of the game is really rather great.  As I said earlier, they did a very good job of adapting traditional mythology to fit the story without trampling all over it.  Hercules is a bitch who’s just trying to please daddy, Aphrodite is a nympho, Hera is a bitch (and a lush which was funny), and Zeus is still a super strong douche bag who’s the atypical absentee/hard to please father.  Even incorporating Hope from Pandora’s box as the source of your power was done well.  Oops… *Spoiler Alert*… probably should have said that earlier.  Fuck it, EVERYONE DIES!!!!  Kratos absolutely royally bones EVERYONE and then even stabs himself in the gut with the Sword of Olympus in order to release Hope to a world devoid of the Gods (pissing off Athena’s corporeal form because she wanted to take it to rule over the huddled masses).  If you didn’t know that already, and actually cared, then you shouldn’t have been like me and waited a year to play this game.  Don’t like it?  Go whine on a message board/Facebook/your whiner blog about how sad you are that someone ruined the ending for you.  Here’s some more endings that you should know already, Kaiser Sose is actually Kevin Spacey’s character The Gimp, Soylent Green is made of people, Bruce Willis’ character is actually dead, and the Demon killing people in the first to Paranormal Activity movies was actually summoned by the grandma of the main characters and her crazy coven of witches when they were just little girls.  If you don’t want to know how shit ends, DON’T READ REVIEWS!

All-in-all, it was a great game that played well but just had some big glaring flaws.  Much like a supermodel that gets a zit on her forehead.  Sure, the zit is pretty gross but you would still bone the hell out of her.  GoW3 is definitely worth the play.  Others may have reviewed it before me but rest assured, I BEAT IT FIRST!

3 thoughts on “God of War III”