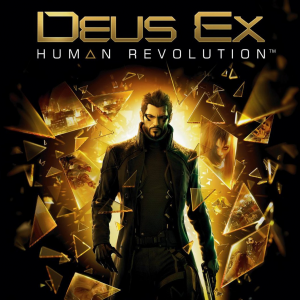 Time : 30 hours to do just about everything, tons of exploring, plus all of the dying.

In case you didn’t know already Deus Ex: Human Revolution is actually a prequel.  Now I’m not going to go into my old experiences with Deus Ex or Deus Ex: Invisible War as this is a prequel and doesn’t require you to play any of the previous titles, and lets face it, if you haven’t played them by now you most likely wont.  So lets jump right on in to this very well augmented game and take it on as a stand alone complex.

This. Game. Is. Awesome!  Props to Edios and SquareEnix as they really did a great job making a first quality FPS/RPG hybrid.  It was also very refreshing to play a game that let you choose how to play (Kill everyone or Kill nobody, Stealth or Run and Gun).  For my First play through I decided to play on the hardest setting and kill nobody (a challenge I assure you) especially at a few key moments in the game.

Setting.  It is the year 2027 and the human race is getting into Bio-mechanical Augmentations (think RoboCop, but not quite as advanced as Ghost in the Shell).  You are Adam Jensen, the Private Security Head for Sarif Industries (one of the Biomech companies) and are caught right in the middle of a battle between those for Biomech augments and those who think biomech augments are dangerous and against human nature.   Tensions are high between these two factions and there have been multiple terrorist attacks on Sarif Industries and its your job to find out who is behind them.

Playability.  Like I said before the game lets you choose how to play the game.  For my first play-through I opted to play stealthy ala Metal Gear Sold.   In my opinion, this is the Edios / Square-Enix wanted you to play, as ammo is scarce and enemy take downs are only useful if nobody is shooting at you.    Enemy AI wasn’t too dumb as they were able to catch me off guard a few times in literally jump out of my seat moments,  and they didn’t always follow the same path use the same cover/tactics to get to you and on Hard one slip up is game over.  The transition from First person to third person when you take cover at first was awkward but quickly became second nature and made it much easier to get around unnoticed, except when you are in vents (you spend a lot of time in vents).    When I did have to run and gun I found myself more exasperated then usual as aiming seemed a little awkward since I am so use to “iron sites”.  Its also most likely that since I was only playing stealthy and using non-lethal methods I rarely had to fire any other guns so I didn’t really have much “practice” with them when it came to boss battles.

Graphics.  The game was very beautiful and the stylization fit the setting of the game perfectly.  A mix of Blade Runner and Tron made this game super stylized plus music that would remind me of Mass Effect was warmly welcomed.  The CGI scenes were very nice but seemed grainy to me, plus you better like the color yellow as everything has a slight hue to it.  I also thought the Character models were not top quality that I know Square-Enix/Edios can provide.  Although they were very detailed they still felt blocky and the motions the characters made when they spoke to you was damn near spastic.

Story.  Here is where the game really shines.  The people at Edios did a fantastic job setting up a globe sprawling story that kept me guessing till the very end.  I enjoyed every twist, turn, the over the top things Adam did to protect the company that he works for and in end all of humanity, classic RPG set up, and I loved every minuet of it.  I will say that the game is not for everybody as a lot of the story develops in conversations and almost political debates with other characters, it can seem a bit dry or slow paced if you are not overly interested.  Especially if you are expecting non-stop action and prefer to have random people bark orders at you over a com-link (looking at you Gears of War Fans).

All in all I enjoyed the game thoroughly and is a great stepping stone for anybody who wants to look into starting RPGs as it did a great job of mixing the game play styles.  If you enjoy Metal Gear Solid or Mass Effect series I can’t recommend this game enough, buy it now!  I will be playing this one again and will hopefully get 100%, but the biggest accomplishment for me, was getting these three achievements/trophies in one play-through: