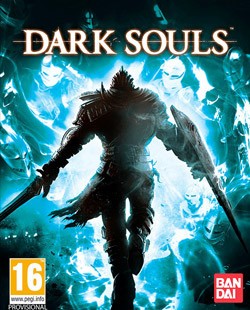 Time: 50 hours for one play through

When was the last time you tried playing one of your favorite games as a kid.  Like old school Mario, Sonic, Metroid or even Zelda?  Well If you have gone back and given them a whirl, you will find quickly that these games are unforgiving and quite a challenge.  You will think to yourself:  “Good God, I use to be awesome at this game and never die once.  Why the fuck cant I get past the first level?”  Now I may be over the top a bit here, but I guarantee that you are nowhere near as good as you use to be as a snot nosed kid glued to the TV.  Now, Lets say you wanted to have that feeling of “Holy Shit I suck” but on a more current game….Welcome To Dark Souls.

Gameplay:  Remember those old games where you would just be set in the world and it was up to you to find out what the hell to do or where to go think Zork or KOAH.  Well Dark Souls takes it one step further asking you to have either prior knowledge or a strategy guide (read: the internet) as some of the games requirements or progress is just mind blowing, ala Castlevania: Simons Quest.  The first thing you will notice is how sluggish the controls feel and this will ultimately lead to your first few deaths.  Later in the game the controls feel a little better but you will still run into cheap situations regardless on how awesome you are, or think you are.  At its heart Dark Souls is a simple dungeon crawler as each level is simply laid out, with a entrance, save point, and boss.  The only problem is almost every enemy needs to be treated as a boss battle as even the slightest mistake will end up with 70% of your life gone before you even get an attack in yourself.  This results in A LOT (let me say that again in bold) A LOTof trial and error, and will try your patience to the edge of madness.  To add to an already frustrating experience, each dungeon has an assortment of treasure almost always placed in precarious locations designed to make you die.   Progress is saved and measured by your progress to Bonfires, Bonfires allow you to have a safe haven and use your points to level up or repair your equipment.  It is also where you will return once you die next.  99% of the time when you find a bonfire it is a moment of extreme joy as you know you are progressing and you no longer have to deal with those fucking jerks behind you anymore.  However, Bonfires are not just all fun and games as once you rest at a Bonfire most of the enemies you have defeated will return.  Great if you are wanting to grind, horrible if you are scared for you life on how the hell you are going to get out of here.  Oh also just in case you weren’t having a hard enough time already, when you die you drop all of your experience points.  Now you can get them back but you have to get back to where you died and “Recover” your body.  If you fail to Recover you body and Die again you lose EVERYTHING.

Graphics:  The opening sequence is nice and dark and looks cool but the rest of the game feels really dated.  Some magic effects look nice but most of the time you are just going up against whatever crazy enemy in another generic dark dungeon you are in.  Granted the locals do change and every once in awhile you might have a large view of an area that looks neat, but you are so obsessed with reaching the next Bonfire (and not dying) to notice.  And that is the main aspect of this game, if you want pretty go play Crisis 2 or some crap, Dark Souls is all about the open free hardcore Action Adventure RPG.

Sound:  There isn’t a lot of music except in certain areas or bosses but most of the time is spent listening to your armor clunk around as you run or the clang of your sword hitting the wall.  I also gotta say that the voice acting isn’t all that great as well, not that there is a lot of talking or story anyway, but the voice acting they did have sounded off for most characters.  I also hated the sound effect for running/waling in grass or snow and since the game is quiet most of the time if you are in a grassy or snowy area with no music all you hear is CRUNCH CRUNCH CRUNCH CRUNCH CRUNCH UGH, I would usually end up turning the volume way down, but then I wouldn’t hear the skeleton waiting around the corner to ambush me….YAY!

Overall: Dark Souls and I had a love hate relationship, This game is definitely only for the hardcore gamers out there as it will grind at your patience.  However there is something to be said about a game that doesn’t just hand you the answers or show you the path with no challenge.  So for that I have utmost respect for the developers at Havok and From Software.  Also Dark Souls has the most interesting Multiplayer experience I’ve ever had in a game where you can summon another player to help with a boss or be invaded by another player.  This added both a great help and bane to your experience as having another player help with a boss is great but getting invaded by another player while you are trying to beat a tough enemy sucks, however, beating another player in PvP is easily one of the most satisfying experiences you can have, alternatively, getting nuked by another player when you are making some good progress will destroy a controller or two.   All in all I am happy to have this one under my belt and will place it on IBeatItFirst.com as a badge of honor if only to say “Yeah I Beat it First” , but I am not willing to put it on the coveted “keep” shelf.

Regardless, when you decide to pick this game up remember I BEAT IT FIRST.