This past weekend in Austin, Texas the very first ever Killer Queen Nationals, dubbed BumbleBash I, took place along side Big Buck Hunter World Championships at The Belmont. The Belmont proved to be a fantastic venue for a tournament that will go down in the history books. 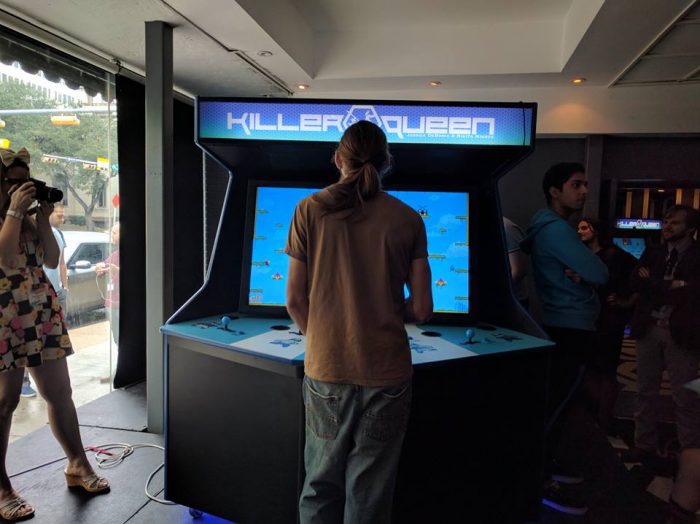 Never played Killer Queen or seen it before? I’ve previously reviewed Killer Queen, but for those unfamiliar with it, let’s give a quick rundown. Killer Queen is a 5 vs. 5 Arcade game that can be best described as Joust meets Mario. Each team has 1 queen, who is responsible for controlling gates that allow the 4 other players to either get speed and move faster or transform from a mere drone to a warrior that can now fly and kill others, including the enemy queen. There are 3 ways to win, military, economic, and snail. Military victory is achieved when you kill the enemy queen 3 times. Economic victory on the other hand is achieved when you gather berries and fill your up hive. Snail victory is just a matter of riding a snail into your teams goal. To gain speed or become a warrior, a drone will have to gather a berry and enter a gate that is either white or their team’s color. This is where the queen comes into play, as they have to fly over a gate to change it to their team’s color, preventing the other team from using it. This leads to a very strategic game where team work is everything. 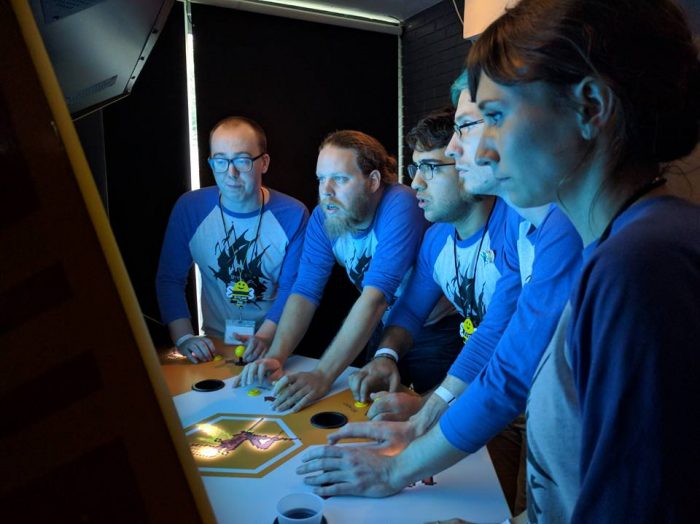 Okay, now that we got that out of the way, how was the first ever National tournament for this game? In one word, hype. BumbleBash featured teams from Phoenix, San Francisco, Portland, Chicago, Minneapolis, New York, Charlotte (or Char-lit if you ask the right people), Columbus, Austin, and Kansas City, there was a lot of city pride on display. Group stage play took place on Friday, with 15 teams out of 32 qualifying for the top 16, with the 16th spot going to the winner of the Wild Card tournament held Saturday morning before the main tournament took place later Saturday evening. When everything was said and done and Sunday came around, no was left with a voice. The hype was real, and no one is going to forget BumbleBash I anytime soon.  The matches were intense, and everyone was glued to the monitors watching the matches. They were cheering and chanting for their friends, their scenes, or even teams from their region. Phoenix, San Fransisco, and Portland could be heard chanting West Coast, Best Coast as they rallied around each other in support over tournament favorites New York and Chicago. 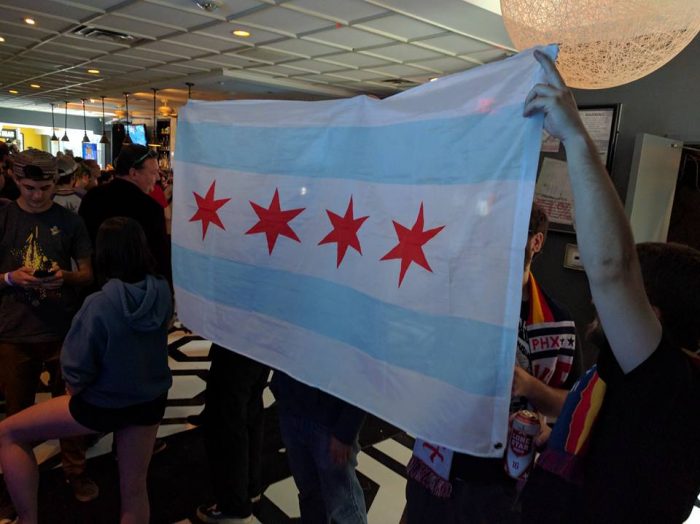 The legend of the tournament though was Burton Flake from Phoenix, aka Bee Bear Banditos, the one man wrecking crew. In a tournament of 5 vs. 5, he went solo, playing with 4 AI bots (affectionately named Greg by those in Phoenix). That didn’t deter him though, as he pulled off a victory in the group stage only to fall 2-1 in the best of 3 series. This is where his legend began, as everyone was now on the Bee Bear Banditos hype train. Once Saturday rolled around, he was set to face off against the host and newest addition to the Killer Queen community, Austin, TX. Burton showed off his queening skills and won the best of 5 series 3-2, which moved him on to the second round before getting knocked out by Beediocre from New York. The legend of the Bee Bear Banditos isn’t going to go away any time soon, and was defiantly the fan favorite of the tournament. 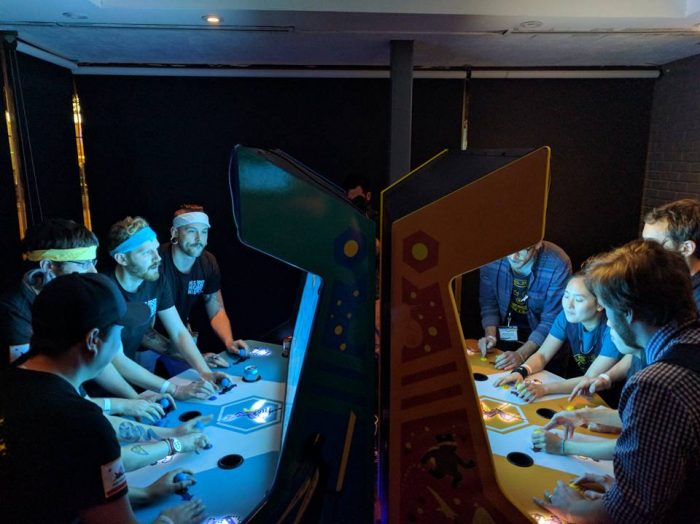 Standing in the crowd watching the matches you would think you there was a Football or Soccer match on with the all the cheering and chanting that was going on. BumbleBash brought the best Killer Queen players together, and it showed with some of the most intense matches I’ve seen and played in. Speaking of playing, the nerves and intensity where extremely high when you stepped up to the cabinet. Getting a victory was extremely exciting, while getting a lose was devastating. The heart pounded in my chest post match after my team (Bumblebasstronauts) played with everything they had. Every team left everything on the table every match. The intensity of BumbleBash can’t be explained, it can only be experienced. A man won $20,000 playing Big Buck Hunter while the semi-finals were taking place for Killer Queen, and the cheering for Killer Queen drowned out the Big Buck Hunter crowd, with a little over $2,000 on the line for a team of 5. Again, the hype was real. 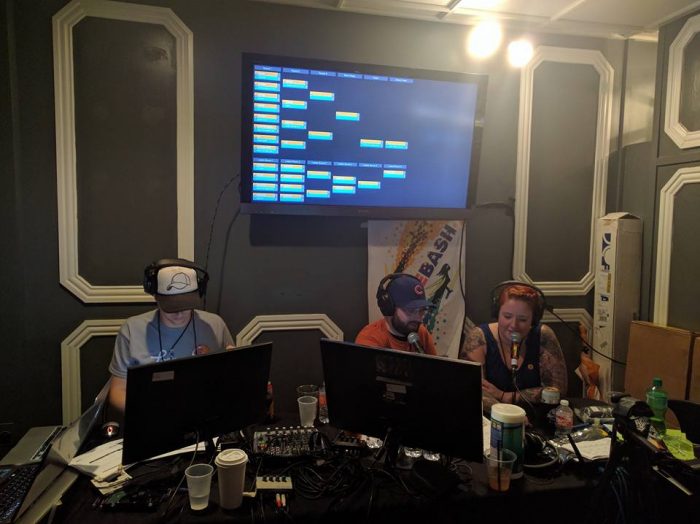 The top 16 tournament was a double elimination best of 5, with the final being a best of 7, and it did not disappoint. The winners final came down to Team Werk (T.Werk) from New York and Excuses from Portland. Excuses handed Team Werk their first loss of the tournament, sending them to the loser’s bracket final, in which they achieved victory over Hot Dogs from Chicago. This lead to a rematch in the finals with Team Werk seeking revenge against Excuses. Since this was double elimination, and Excuses hasn’t lost a series, Team Werk would have to beat them twice to win the tournament, while Excuses only needed to win one series. Team Werk didn’t let that slow them down, as they came back with a vengeance, and took the first series 4-1, with the second series being tighter, but ultimately Team Werk came home as the tournament winners. 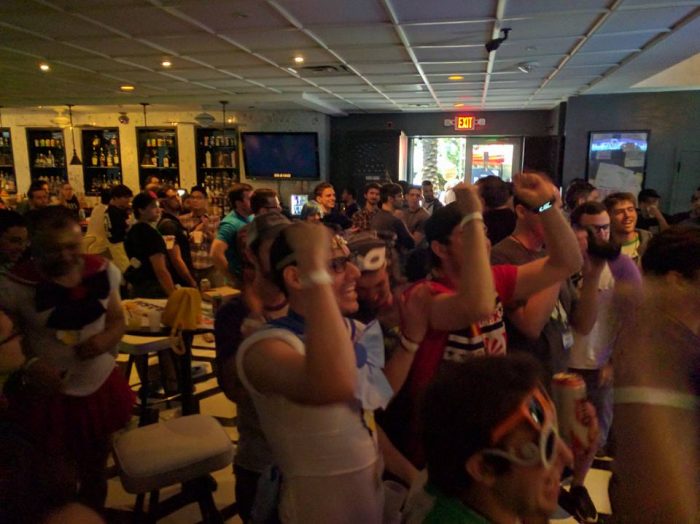 BumbleBash I was a fantastic tournament supported by the fantastic Killer Queen community. New friendships were made and rivalries were started. BumbleBash II was announced to be taking place in Minneapolis on October 6th, 2017, and you can bee sure we will bee there (sorry for the bee puns, but not really). Bee sure to head on over to the official Killer Queen Arcade Twitch channel to see the recap of all this weekend’s action.