As 2012 comes to a close, the staff here at I Beat It First would like to wish you happy holidays as we announce our favorite games and favorite gaming moments of the past year.

#5 The PC: A platform? Really? Why yes, because nVidia’s new 600 series cards made me have to change my pants with the power they offered. It gave PCs the power to run next generation graphics now. Valve’s Big Picture mode got released, and the confirmed the existence of a “Steam Box,” otherwise known as a PC for your living room. Two great MMOs got released on the platform. Amazing tech demos got shown running on PCs, Chris Roberts announced the PC exclusive Star Citizen. Have you seen the Crysis 3 PC trailer? Grass that looks so good, it puts real grass to shame! As IGN stated in a recent article, the PC has gone from “does it have a future” to “is it the future?”

#4 Black Mesa Source: I have been waiting for this mod since Half Life 2 came out, so as long as I’ve been waiting for Half Life 3. This mod actually got released whereas the other hasn’t been officially announced. It’s just like Half Life, but with Half Life 2 graphics (which are still awesome), and AI that recognizes when they are standing in your way, and they move. So it’s awesome, and free. I like free.

#3 War of the Roses: An amazingly fun medieval slaughter fest. It’s basically just like any multiplayer third person shooter out there, but with swords and bows. You can be a mounted knight, an archer, a foot solider, or anything else that fits the time period. Be prepared to die a lot, and have a lot of fun doing it.

#2 Guild Wars 2: I just recently started playing this game, and was also the first game I got to test out my xbox controller on my PC with. It plays great with an xbox controller by the way. It’s everything I like about traditional MMOs without the stuff I hate. It lives up the hype and gets my MMO of the year award.

#1 Planetside 2: If you have read any of my posts, then this shouldn’t surprise you. The beta was awesome, the actual game even better. No FPS out there can match it’s scale. If your PC can handle it and you love multiplayer shooters, give it a try (its’ free, so what’s stopping you?). This game gets my game of the year vote, as well as shooter of the year. Heck, it supports 2000 players per continent and looks better than Call of Duty. I know, it’s an MMO, and I said Guild Wars 2 is my MMO of the year. These seem at odds, but Guild Wars is more of an MMO in the traditional sense, so it gets the win there, where Planetside is more of a multiplayer shooter, with massive amounts of people and persistence. But beware, friendly fire is on, so don’t shoot me in the back. Thanks.

Seriously?  PC as your number 5?  In case you guys haven’t figured it out by now, Chris is a hardcore PC fanboy, I’m a Playstation fanboy and Jason equally hates everything.  That being said, I don’t really know of a specific order that I would put these items in so I will just list them.

Playstation Plus Your Instant Game Collection: Keeping with the fanboy motif, I have to say that this is probably one of the greatest additions to the platform that Sony could have done.  While the + membership had some good perks before hand (cloud backup of save game files, 60 minute demos of select games, discounts on many items, etc.) it was still a little hard for some people to see a reason to shell out the money since it’s not a necessity.  Microsoft did it (kinda) right by making a Live account mandatory if you wanted to do online gaming and stream content, but Sony did it very right by making that all free from the get go.  While free was awesome from the gamer perspective, Sony was then left with the task of figuring out how to get people to pay for something they already get for free.  With this addition there is now total value to the + membership (who doesn’t like free?) and Sony continues to add to the list on a regular basis, most notably adding Borderlands, LBP2, Ratchet and Clank: A4O, Quantum Conundrum, and Infamous 2 to libraries at no additional charge.

Borderlands 2:What can be said about this game that hasn’t already been said?  The game is fun, the dialogue is HILARIOUS, and there are a BAZILLION guns in it.  Sure there have been a couple of articles popping up that point out where it fails as a “shooter”, but that wasn’t their goal.  The goal of the BL series is to be fun, off the wall, and insane.  Goal met, job well done, keep up the good work Gearbox.

Ni No Kuni: Yeah yeah yeah, it’s full release date isn’t until January 2013, I know.  It’s demo came out this year though and it made me want this game even more.  You can’t always judge a game buy it’s demo but we know the story will be great from the resume of Studio Ghibli and the demo answered the only nagging question left, “how will the fighting mechanics hold up?”.  I’m 100% sold on this and am certain that this game will show up on my 2013 list as well.

G4TV is no more: I know that I’m going to get all sorts of hate mail for this but G4 suck balls and has for a while.  Back in the day G4 was awesome and one of the best sources for gaming news and reviews but they lost their way and some point and never even bothered to try to get back on track.  The state of gaming has changed dramatically over the last 10+ years and is constantly evolving.  I for one am happy that they have stopped trying to say that they are the destination for gamers and now we can work on trying to get them to stop saying their the destination for Young Adult Males.  If they keep on track they will be nothing more than the destination for Frat Bro’s.

Indie Game The Movie: Sure it seems a little contrite to put a movie about games on my best of list, but it’s really a great movie.  If you haven’t watched this documentary yet you should boot up your Netflix streamer and check it out.  I don’t think that a documentary, or any film for that matter, has made me like and hate a person at the same time, or even made me feel for each of the subjects, like this movie has.  It was a small indie release that has garnered big time publicity and I applaud it.

~Yes, I’m going to be that guy right now.  In June of 2012 I was bestowed with the greatest baby that is known to man, my son Ronin.  While he has taken away quite a bit of gaming time, I wouldn’t have it any other way.  Anyone that has met him can attest to the validity of my statements; he is the happiest, cutest, and greatest baby EVER!  I love that little monkey with all my heart and look forward to spending many many years teaching him gaming and sports. 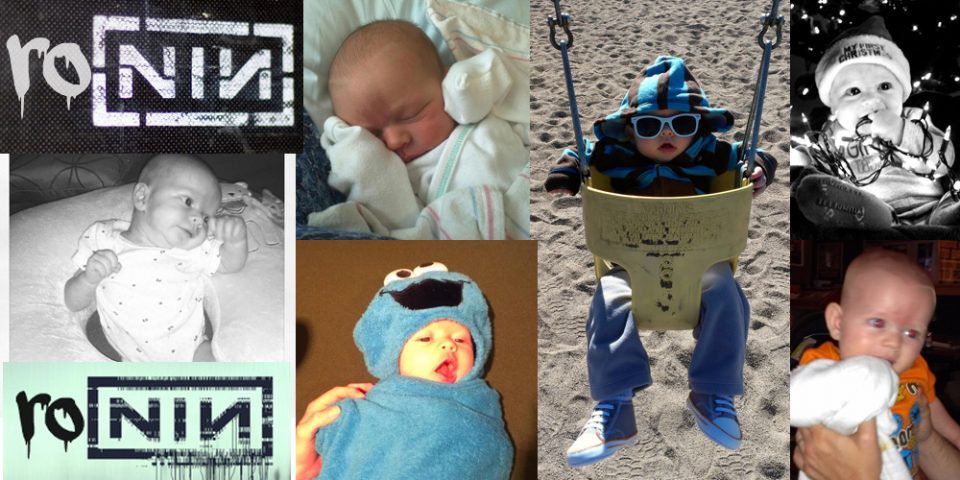 Jason’s Picks (The most Important)

Fist of all Ronin is an awesome baby, however, NIN is not awesome anything and that NiN ronin thing is lame, suck it.

#5 IBeatItFirst.com:  I know it sounds hokey but I love this website and I love my buddies who continue to work with me to make this place awesome, (except for you Boos, you are a lazy son-of-a-bitch) and I am looking forward to seeing what the future brings for our humble little site.

#4 HD Collections:  This year has definitely seen its share of fantastic HD remakes of some good ole games and since I am a Good ole gamer these make me jump around like a 5 year old again.  However, just like 90’s cartoon shows sometimes the nostalgia is better than the game its self, but I have had a blast playing some HD remakes of my fave old games like Sly Cooper and the Metal Gear series.

#3 The WiiU Fail:  Now some of you may hate me for this but I kind of enjoyed watching the WiiU fail a little bit this year. Now the system its self didn’t flop per-say, but it nobody is surprised that you can walk in any GameStop or Best Buy and buy one right now.  To this I say “Ha” as I know I told people when the Wii came out that gimmics and pandering to the casual gamer niche will only get you so far, and this may be the proof needed to show I was right.  The WiiU’s lackluster launch titles didn’t help it much either but we will see as the first party games come out and how much that helps.   But for the time being I am enjoying watching the WiiU squirm.

#2 Rayman Origins:  This may be a 2011 game but I played it long into 2012 and was easily one of my biggest surprises this year.  If you are a platformer fan and want a serious challenge you really need to check this one out.  It also makes me excited for the soon upcoming Rayman Legends even if its only said to be on the WiiU Im sure it will come out for “better” consoles as well.

#1 Borderlands 2:  This should not be a shock to anybody who regularly reads our site but I love the crap out of the Borderlands series and Borderlands 2 was the only game this year to stand up to all the hype.  Plus with all of the DLC coming out its the one game I keep coming back to over and over again this year.  P.S. The DLC is actually well done and a lot of fun so I would recommend them as well.

Thank you all again for viewing and for making us a part of your daily “what lame website should I check out now” routine.  Lets all have a happy new year and here’s hoping that 2013 will have many more  awesome games so we can say I BEAT IT FIRST!